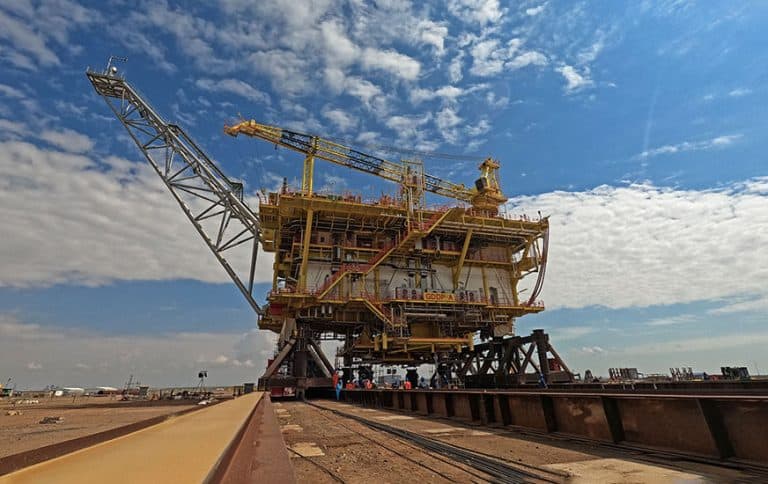 The oil and gas industry is a key contributor to Turkmenistan’s economy, making up around 80% of its exports, so continued investment in energy infrastructure is crucial. The Garagol Deniz West field is located around 75km offshore of Turkmenistan in the Caspian Sea. Further exploration of this area will be crucial as it has the potential to significantly increase energy output and help further the success of the country’s oil and gas industry.

Mammoet had previously supported the engineering and construction company – ILK Insaat, with the load-out of the jacket for the Garagol Deniz Drilling Platform A (GDDP-A). The company’s attention to detail and overall performance on the project led to Mammoet being asked to return to the same site near Turkmenbashi to complete the load-out of the platform’s topside as well.

The communications across the project’s various teams proved vital to its success, even before anyone set foot on site. With commercial airlines impacted by the COVID-19 pandemic, Mammoet’s expertise was brought into the country using specially chartered aircraft. Following a period of quarantine, the team could then safely start work on-site while adhering to strict COVID-19 regulations.

The topside had been in situ for some time, so there were concerns about the high level of friction that could possibly occur during the breakout. Mammoet designed a solution using high capacity hydraulic breakout jacks in combination with strand jacks that minimized the risks and ensured the manoeuvres could be performed as smoothly as possible. Although the friction was still high, the method used meant Mammoet was able to precisely realign the structure throughout the operation.

First, the topside was jacked-up and weighed using load cells, coming in at nearly 4,000t.

The load-out operation was split into three phases: the initial breakout of the platform, the movement via skid tracks onshore, and the actual load-out from land to the barge.

Mammoet worked with the client to grease the skid tracks, before pushing the topside from its initial position using breakout jacks. Strand jacks were then used to skid the topside along the skid tracks and it was loaded out onto the barge, ready to be installed offshore in the Garagol Deniz West field.

Communication between all teams proved especially important while the topside was loaded out onto the barge. A load-out supervisor was in direct contact with the ballast control room, enabling the most accurate ballasting possible, resulting in safer and most efficient operation.

The GDDP-A is due to come into operation during the second half of 2021. The platform is equipped with the most up-to-date technology, which enables it to operate automatically and reduces the need to have numerous staff working and living on the platform.

It is expected to produce a peak of 10,000 barrels of oil and 35 million cubic feet of gas per day and will make a significant contribution to Turkmenistan’s oil and gas operations in the Garagol-Deniz West field.