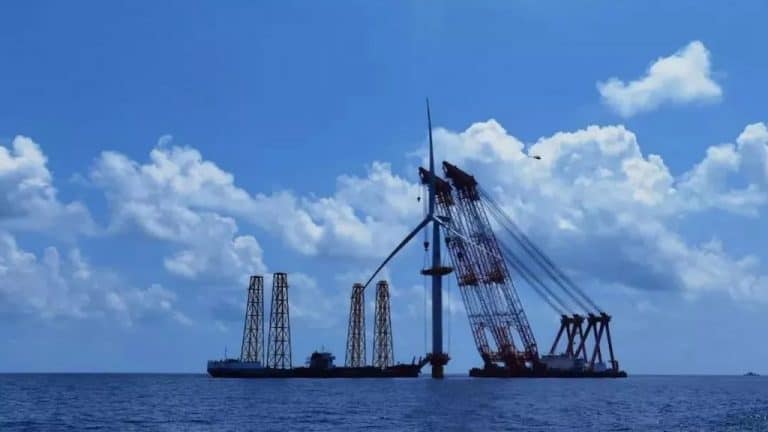 Shandong Company and Yantai Power Plant uses their management and technical advantages, organized a team including Tianjin Port and Shipping Bureau and Yantai Salvage Bureau, and also Juli Rigging to study together and devised a new lifting methodology.

The water depth of the overall hoisting area is 30 metres, and the operation is difficult. The project team and all participating members have carefully planned the operation. On August 18th, the assembly of the wind turbine has been carried out on-land and at 9 am in the morning, the heavy-lift vessel hoisted the entire wind turbine and completed the installation the following day.

As early as 2020, Juli Rigging has flexibly responded to market demand and actively explored overall lifting equipment. In this project, the overall hoisting plan of the rotor and blades was researched and formulated with the customer, and the hoisting was refined and improved.

The technical requirements of the project were met within a limited time; the production process was improved, the production quality was strictly controlled, and the supply chain of the components are closely monitored.

After the spreader is hoisted, the overall smooth hoisting of the wind turbine can be realized, fast positioning and precise installation, ensuring the safety and timeliness of the entire hoisting stage, and steadily advancing the project construction.

The overall hoisting of offshore wind turbines makes full use of the resources of the terminal. The towers, nacelles, hubs, blades and other equipment of the wind turbines are assembled on a large barge. The wind turbine is hoisted and docked with the foundation pile to complete the hoisting task.

Compared with conventional hoisting methodology, the assembled hoisting has the advantages of using shorter offshore operation time, less high-altitude operation on the sea, and full utilization of the working surface, and has made a major breakthrough in the construction of offshore wind power projects.

In the next step, the project will adopt a simultaneous construction plan for offshore split hoisting and overall hoisting to accelerate the progress of the construction.

Once completed at the end of the year, the wind farm will comprise 58 EN-161/5.2MW wind turbines supplied by Envision Energy and produced locally at the Haiyang Offshore Wind Power Industrial Park.

The wind farm will produce approximately 820 GWh of electricity per year.

The project is valued at CNY 5.545 billion (around EUR 693 million) and is the most mature of the seven demonstration offshore wind farm projects planned to be developed off the Shandong Province.

The first wind turbine was installed in May 2021 and the Chinese province aims to develop 12.6 GW of offshore wind capacity by 2030.

As wind energy is still going strong in China and the lack of resources due to multiple projects in the country, we can see that China is finding more engineering solutions to solve this problem. Hope that we can get to see more such engineering moves in the future.