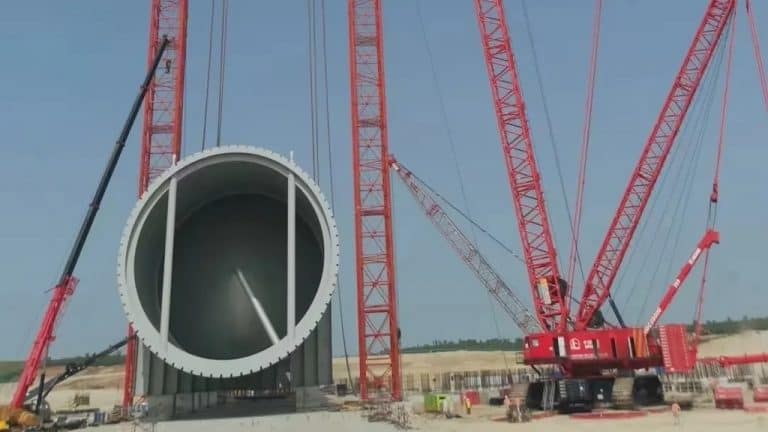 About two weeks ago, at the Russian AGCC ethylene project site, XCMG’s 2000-tonne crawler crane XGC28000 “partnered” with the 2500-tonne gantry hydraulic lifting system. The XGC28000 uses its main boom configuration and as a tailing crane, the first mega column was successfully installed in place, marking a milestone in the project.

It is reported that the quench tower has a total weight of 1,500 tonnes, a height of 80.61 metres, and a diameter of 13 meters, making it the heaviest equipment in the ethylene plant. The entire hoisting lasted only 9 hours, demonstrating the strength of China-made heavy lift cranes.

With its obvious advantages in maturity, safety and reliability, XCMG’s XGC28000 has become the main lifting equipment for Russia’s AGCC project. As soon as the order has been received, the XCMG 2,000-tonne crawler was transported from China to Russia as soon as possible, overcoming many problems such as floods and epidemics in the process.

Upon arrival at the site, XGC28000 adopts the working condition of 84-meter main boom + 54-meter tower boom and completes the assembly of the 2500-tonne hydraulic gantry system which will be the main crane. Then using only one day, the XGC28000 configuration was changed to 60 metres main boom with super lift attachment.

The entire hoisting process was smoothly controlled and accurate, winning high praise from the owner’s project leaders who were observing on-site.

As a demonstration project of China-Russia cooperation in production capacity, the AGCC project is a key project of the “One Belt One Road” initiative. After the project is completed, it will become one of the largest polymer factories in the world, with a polymer production capacity of 2.7 million tons per year, which will be used to produce clothing, medical equipment, wires and other daily and industrial products.