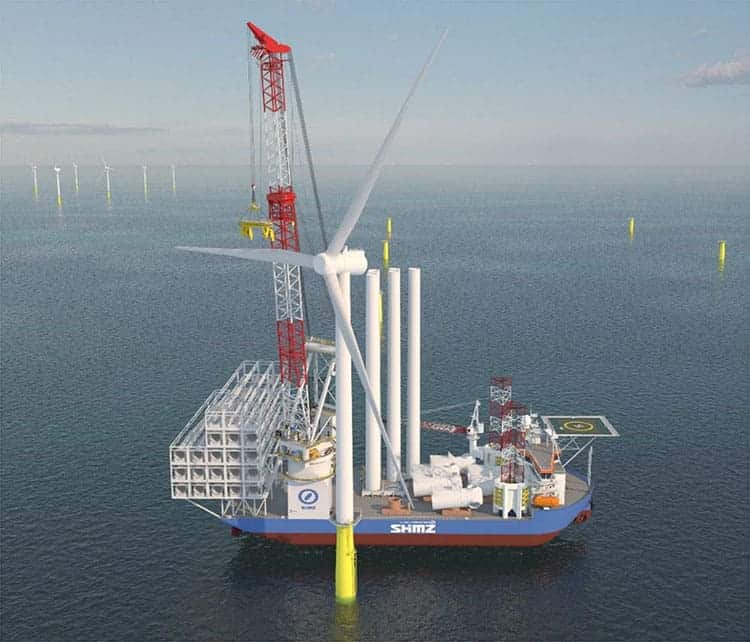 Shimizu invested an estimated 50 billion yen for the world’s largest Self-Elevating Platform (SEP) vessel that is capable of transporting and crane to install ultra-large-scale offshore wind turbines. Construction of the vessel started in August 2019.

Shimizu plans to bring in orders for the construction of offshore wind farms, a market estimated to be over 5 trillion yen. Completion is scheduled for October 2022. Shimizu will increase its competitiveness in the renewable energy sector and further expand its engineering business through this project.

Japan`s new `Act to Promote Offshore Use by Offshore Renewable Energy Facilities` was enacted in April of this year and the offshore wind power market is projected to rapidly expand. Planning is currently underway in Japan for a publicly-disclosed total of 10 million kW of offshore windfarm power generation capacity. Electric power providers are focusing on economic efficiency and are planning to use large wind turbines of the 8 and 12 MW class, which have not yet been used in Japan.

There are currently no SEP vessels in Japan capable of installing wind turbines of the 8 MW class or larger and because of high demand in Europe, it is not easy to charter a large SEP ship. Shimizu, therefore, decided to build a SEP vessel equipped with the world’s largest transporting and crane capacity and will obtain EPC orders for the construction of offshore wind farms that are being planned in Japan.

The SEP vessel to be constructed will have an overall width of 50 m, a length of 142 m, and a gross tonnage of 28,000 t. It will be equipped with a crane with a maximum lifting capacity of 2,500 t and a maximum lifting height of 158 m, which will make it world-class in terms of operating performance. The ship will be operational in depths ranging from 10 to 65 meters, and it will have four legs implanted in the ocean floor during operation. It will be insulated from the ocean surface by jacking up the hull, ensuring wave-resistant stable operations.

Shimizu collaborated with GustoMSC B.V., a European engineering company, for the planning specifications and design of the ship beginning in October 2018. Japan Marine United Corporation will manufacture the ship and Shimizu will collaborate with Fukada Salvage & Marine Works Co., Ltd., which owns numerous working ships, for operation management.

This SEP vessel is the core of the planned investment in infrastructure, renewable energy, and new business outlined in Shimizu`s Mid-Term Management Plan <2019－2023>. Shimizu intends to market the superior operating performance of this SEP ship to electric power companies in Japan and overseas to obtain EPC orders for construction of offshore wind farms.