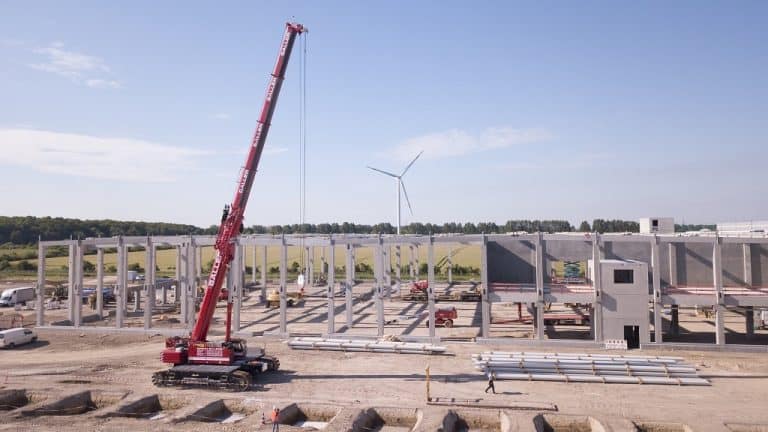 It certainly is no secret among industry experts that the Tadano GTC-1800EX is the perfect assist crane for erecting wind turbines and setting up lattice boom crawler cranes such as the CC 3800-1. But the GTC-1800EX has much more to offer than just wind power, as it recently demonstrated during a big job for Saller in Rostock, Germany.

Versatility is pretty much in the DNA of the Tadano GTC-1800EX. After all, the telescopic crawler crane is made in Zweibrücken, the origin of its all-terrain siblings in the AC series and of the lattice boom crawler cranes in the CC series.

In other words, the foundations for a powerful, high-performance, and versatile telescopic boom crawler crane were already there. The people at crane rental company Saller thought the same thing, and so used the GTC-1800EX to install concrete columns and their footings, each weighing up to 25.7 tonnes, during the construction of a central warehouse for a large e-commerce business.

“Our competitors have primarily limited themselves to using the crane for wind power projects to date. However, it’s an extremely versatile crane and a perfect choice for conventional work sites, infrastructure projects, and building construction as well. It was the perfect machine for our project in Rostock,” Managing Director Franz Saller explains.

A tough job with no breaks

To take care of this assignment, the Tadano crane was configured with a maximum track width of six meters and a maximum ballast configuration of 45 tonnes of counterweight and 15 tonnes of central ballast. Once set up this way, the GTC-1800EX was ready to safely handle the 210 columns in the project.

The concrete columns were brought pair by pair to the worksite on a lowbed trailer, after which the GTC first unloaded them and set them down temporarily on the ground. Once there, the Saller assembly technicians replaced the slinging gear with lifting rods that were inserted through premade holes in the columns. Then, the GTC took the concrete columns, which were up to 17 meters tall, brought them to a vertical position, and placed the footings in the corresponding foundation holes on the ground.

“We repeated this operation endless times – we had a total of 2,400 concrete components and 210 columns to install –, so we feel confident saying that we really put the GTC-1800-EX to the test for more than two months with this job,” crane operator Dennis Kase highlights.

“The perfect machine for the job”

“And the Tadano never faltered at any point in the project,” the crane operator says while praising his crane and the way it proved itself during the job.

The powerful winch featured by the GTC-1800EX made an impression on him in particular. The 13.9-tonne line pull makes it possible for the crane to use the 245-meter-long and 26-millimetre-thick wire ropes on its primary and auxiliary hoists to lift even heavy loads with low reeving – this saves time during setup and re-reeving, as does the maximum rope speed of 139 m/min.

He also considers the ease of transport with a transport width and height of only three meters for the base crane, as well as fast and safe setup and disassembly, to be a crucial advantage: At the worksite, all assembly steps can be controlled via remote control or from the cab without assembly technicians having to work in the danger zone, making setup efficient.

In addition, counterweights are placed on the carrier and superstructure, and the crawler carriers and second hoist are all mounted automatically with the self-assembly feature. This improves safety. “And since the track width can be adjusted between three and a half and six meters and can even be retracted and extended asymmetrically during travel, the GTC was just perfect for this worksite,” says Dennis Kase as his closing statement, sure of one thing in particular: The Tadano GTC-1800-EX is definitely not a one-trick pony – and it really is the right machine for a lot of things!