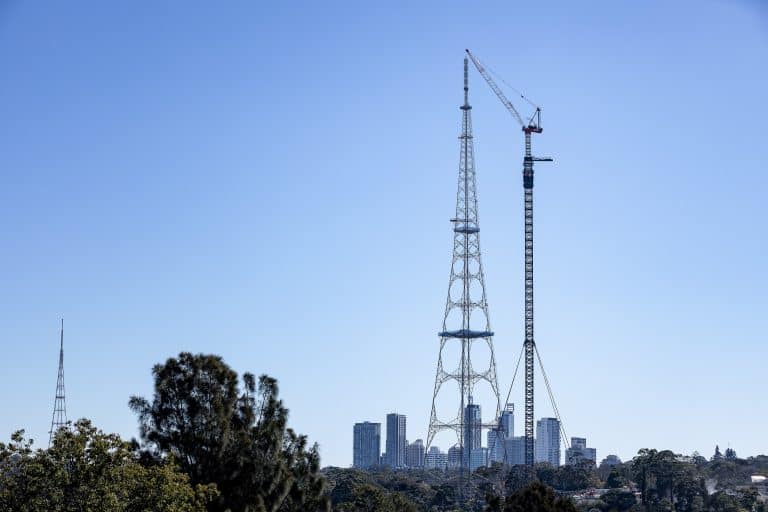 Australian crane company, Marr Contracting (The Men From Marr’s), in partnership with Mirvac, has successfully removed the top section of one of Sydney’s highest and most recognisable structures, the former TCN-9 TX transmission tower at Willoughby.

Built in 1965, the lattice ‘Eiffel Tower’ was Sydney’s first television tower and one of three towers known as ‘the Artarmon triangle’ that broadcast television on behalf of major media companies before being decommissioned in February 2021.

With the departure of Nine Entertainment Co to North Sydney, Mirvac acquired approval to remove the tower and redevelop the site into a new residential community.

At 233m, the tower, which was Sydney’s tallest structure until Sydney Tower was built, requires a specialised craneage solution to dismantle it. Now fully erected, the top of the tower crane stands over 200m above ground level.

In early 2020, Mirvac assembled a team of leading Australian and international engineers and contractors including Marr, Robert Bird Group and critical infrastructure experts Kordia, to come up with a solution for designing and managing the process for dismantling the tower, which faced several challenges due to its size and location.

At 233m, this tower is equal in height to a 77 storey building which posed a number of challenges. So, Mirvac approached us to see if we could come up with a solution, using our tower cranes and bespoke equipment, as an alternative to more traditional methods of deconstruction.,” said Marr’s Managing Director, Simon Marr.

As the decommissioned tower was not structurally sound enough to attach lateral supports, the challenge from a craneage point of view was to find a way to get the crane hook height above 233m without the need to build expensive and complicated temporary structures to support the crane.

“We spent 12 months working with multiple stakeholders including our lead engineering consultants, Robert Bird Group, to initially assess what was structurally feasible with our existing equipment before designing a unique approach involving the introduction of guy wires to laterally support the tower crane and allow it to climb to the required height to dismantle the tower.

“We helped build the TCN tower back in the 1960s so we were determined to find the best way to bring it down,” Marr said.

Two of Marr’s cranes will dismantle the tower piece by piece in the coming nine months starting with a bespoke M310D crane which will remove the top parts of the tower while supported by over 200m of tower sections and guy cables attached to four independent foundations anchored into the bedrock. After completing the lighter lifts at maximum height, the crane will climb down to a freestanding height of approximately 90m. Marr’s team will then replace the M310D with an M1280D heavy-lift luffer (HLL) which will remove the heavier modules of the tower weighing up to 60t.

Marr’s involvement in the project also includes providing Mirvac with engineering, procurement and construction (EPC) services to assist in the dismantling of the tower.

“From a design perspective, this has been one of the most complex and unique projects that I have ever been involved with. A key ingredient of the success achieved to date has been the harmonious engagement of multiple stakeholders to produce the best outcome for the client,” said Marr’s Design Manager, James Hiley.

Highlighting the importance of working with experts in their respective fields, Senior Development Manager – Residential Development at Mirvac, Clancy Sprouster, said, “Mirvac has an industry-leading reputation for upholding the highest standards of safety and our design team is comprised of experts in their field. Partnering with Marr as our craneage experts mean we know we are in safe hands.”

With the assembly of the first crane complete, the entire dismantle is expected to be completed by early 2022.

I think for the Marr Contracting, it is really a moment of excitement as they are the guys to erect that tower 60 years ago and also the same company that is dismantling it.