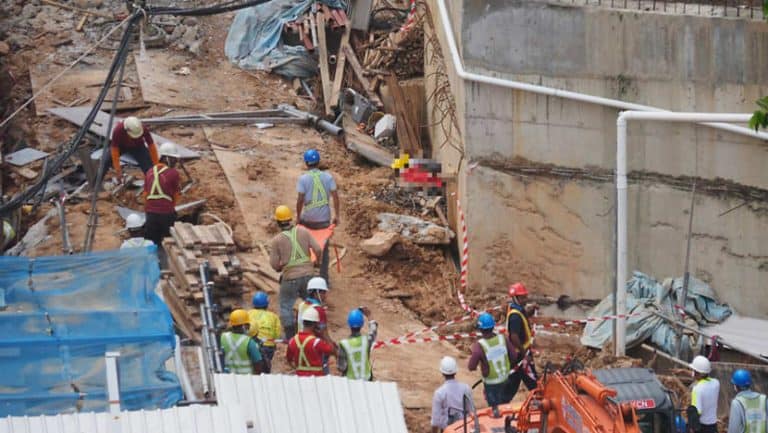 A company and a design manager were charged in court on Thursday (Jan 27) with workplace safety lapses that resulted in the death of a construction worker and injured a second at the Lee Kong Chian School of Medicine in 2016.

A 25-year-old foreign worker died in February 2016 at a construction site along Mandalay Road at the Lee Kong Chian School of Medicine when the floor crane he was operating dragged him along after it toppled and fell off the building, the Manpower Ministry said then.

A second construction worker was injured and taken to hospital.

On Thursday, crane supplier Citigondola was given one charge under the Workplace Safety and Health Act (WSHA) of failing in its duty as a supplier to ensure information about the safe use of its machinery was available.

It allegedly failed to provide information on the minimum safe distance to place the crane from the edge of the building and the wind speed that would render the crane unsafe for use, which caused the death of Islam Mohammad Rakibul and injuries to Micheal Antony Robert Robinson.

Citiwall design manager Vu Phan Anh, now 39, was charged with wilfully doing an act endangering the safety of others – by deliberately omitting to get the floor crane properly examined and tested to ensure it was safe.

He is also accused of preparing “an inadequate lifting”, both acts resulting in the death of the worker and the injuries to the other.

Construction company Citiwall had been handed one charge last month (December 2021) with failing to take measures that were necessary for the safety of Citiwall Engineering’s employees under the Workplace Safety and Health Act.

It is accused of failing to ensure that the safe operating procedure of the crane was adhered to, by locking the mast of the floor crane.

The company also allegedly failed to ensure that adequate safety measures were taken for the operation of the floor crane in strong wind conditions, by failing to provide equipment to the safety supervisor with which he could measure the strength of the wind.

Citiwall is also accused of failing to ensure no unsafe modifications were made to the floor crane, and for not using a comprehensive checklist for pre-operation checks on the floor crane.

The three accused parties are set to return to court in March.