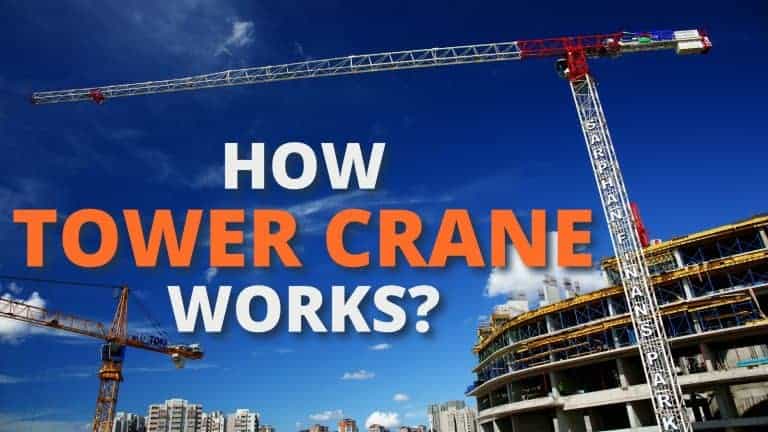 Tower cranes have filled the metropolitan skylines inline with the skyscrapers’ residential and office buildings. It has been an important piece of equipment that helps to shape some of the world’s highest and magnificent skyscrapers of all time. Here’s how they work.

Components of a tower crane

How Are Tower Crane Erect?

Before the tower crane becomes operational to work in a job site, it must be assembled and tested to be in working condition. Below are the three stages of the tower crane erection process

Step 1. Preparation of a foundation

There are other methods of preparing a foundation for tower crane which I will explain in another article.

Step 2. Erection of A Tower Crane

A tower crane is unable to erect by itself, unlike a mobile crane. An auxiliary crane is required at the site for the erection of its basic components. It will start with the mast sections, followed by the turntable, the operator’s cabin, tower peak, all secured using bolts and nuts.

The counter jib with the winch and motor is then installed and hold in position using pendants wires so that they stay in a horizontal position. Next, the jib will be assembled on the ground into one whole section and together with the trolley and hoist, lifted up to be installed. They will be secured as well using pendants wires.

The last will be the counterweight (ballast) to be lifted onto the rear of the counter jib.

step 3. Power Up The Tower Crane

The tower crane does not have its own power source to make it operational. Hence an external power source, usually a diesel-powered generator set is provided at the base of the tower crane and connect all the way up with a power cable to the control panel behind the operator’s cabin.

The crane operator and an accredited engineer will carry out function tests on the tower crane to ensure all components are working properly and a load test will be carried out to test the heaviest load which the tower crane can withstand.

Sometimes at a job site, the tower crane gets higher as the building goes higher as well.

It will be bolted again and this process continues every time the building raises in construction. Note that depending on the construction situation, not all tower cranes require to have the jacking system erected during the installation.

What is the Working principle of a tower crane?

Tower cranes despite their large size and standing tall above the building work on one simple principle – equilibrium. It is designed in such a manner that all overturning forces are counteracted by the concrete counterweights that are hanging at the rear of the counter jib.

When the crane is not lifting any load, there is a slight unbalance due to the weight of the counterweights at the rear. It becomes stable only when lifting loads.

The distance from the turntable to the load lifted affectes the crane’s stability, due to the generation of overturning forces. In orderr to minimize these forces, heavier loads can be lifted closer to the turntable, and lifting capacity decrease as the trolley and hoist moves towards the other end of the jib section.

In orrder to prevent the crrane from overrloading during operraton, it is equipped with a load moment limit switch. If the load exceeds the liftting capacity as specified in the manufacturer’s manual, the load moment indicator in the operator’s cabin will alert the operator with beeping sounds and warning lights.

With advancements in technology, engineering, and the improvement of materials, cranes nowadays have become much safer and compact. There is still ongoing research in the tower crane industry to manufacture more different types of tower cranes to suit the construction operational requirement.