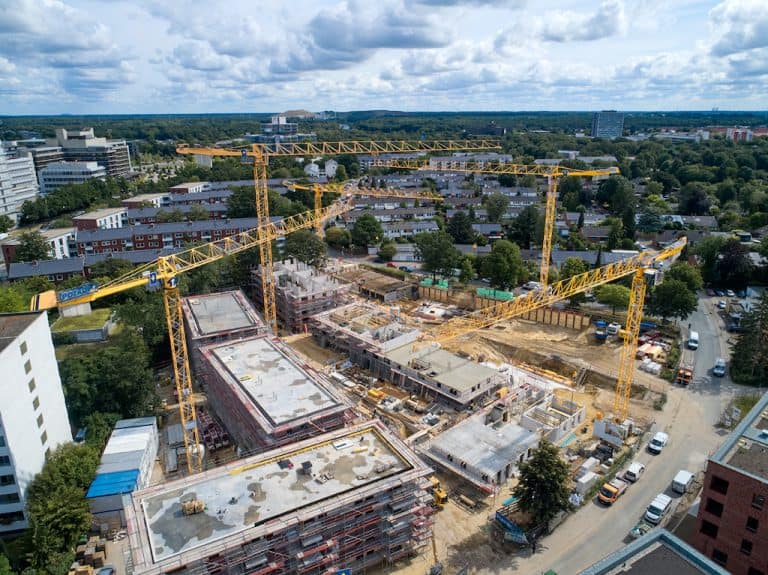 At “In den Sieben Stücken” in north-east Hannover, Germany, two new Potain MDT 189 cranes, one new MDT 219, one MDT 248 and one MDT 178 have been supporting the construction of this new housing development since April 2021. Over the course of the project, 160 residential units will be built. Once complete, residents will benefit from modern apartments spread over a total of nine buildings surrounded by green space.

“We have been working with Potain cranes for almost 20 years, so we know from experience how reliable and efficient these machines are,” said Jörg Hegestweiler, managing director of BKL. “The Potain MDT tower crane range helps our team and our customers to get the job done effectively. Above all, Potain cranes are very user-friendly during assembly, which is quick and straightforward thanks to the CCS crane control system.”

The Potain MDT 189 and MDT 219 are popular models for urban job sites. With their 8 t lifting capacity and respective 60 and 65 m boom lengths, these tower cranes help customers complete their projects efficiently.

The compact dimensions and 1.6 m tower system also make Potain MDT cranes well suited to the confined conditions on the Hannover job site. Four out of the five cranes will be in use there until the end of the year. Construction on the residential development began at the beginning of 2021 and completion is scheduled for mid-2023.

Over 50 years of crane excellence

BKL Baukran Logistik specialises in the sale and rental of cranes, as well as services. With around 300 employees in Munich, Ingolstadt, Rosenheim, Frankfurt am Main, Hannover and Hildesheim, the company, which celebrated its 50th anniversary in 2019, is one of the largest manufacturer-independent providers of crane solutions in Europe. The BKL crane fleet comprises more than 500 construction cranes, of which over 300 are top slewing cranes and more than 200 are self-erecting. BKL is active in Germany and Europe.