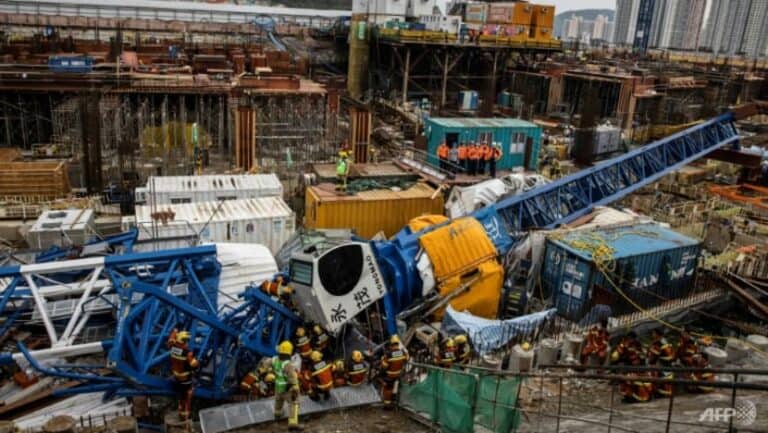 Three men were killed and six others injured after a toweer crane collapsed at a construction site at Kowloon’s Sau Mau Ping on Wednesday (Sep 7), with rescuers trying for hours in vain to reach a victim trapped under the wreckage.

The 65-tonne crane came down on top of several containers that served as makeshift offices at a Housing Society construction site on Anderson Road at 10:49 am.

A 41-year-old electrical worker surnamed Hui was certified dead at the site after suffering a skull fracture, while a 22-year-old assistant engineer surnamed Poon died after being rushed to hospital, police said.

Another 25-year-old engineer surnamed Tsui that trapped under the wreckage was confirmed dead in the evening after rescuers tried to reach him for hours in vain.

“We can only see the lower half of his body, and he was unresponsive when we tried to communicate with him,” fire services official Yim Ying-kit told reporters. “(The crane) is quite heavy so we need various tools and risk assessment before we can rescue the trapped worker.”

Police later confirmed that the man was also killed. The crane was in operation when it collapsed shortly before 11 am but was not carrying any load at the time, Yim said.

Some construction workers were in the cargo containers when the crane fell onto them, he added.

After inspecting the site, Secretary for Labour and Welfare Chris Sun told reporters there was a clear problem with the crane’s base and ordered work to be suspended at the site.

Lawmaker Kwok Wai-keung, who represents the labour sector in Hong Kong, said crane collapses are rare in the city and called the accident a “major blow” to the industry.

The crane was installed in August and had been in use before Wednesday’s accident, authorities said.

The scene of the accident was part of a massive construction site for a subsidised public housing project that aimed to create 19,000 homes

The main contractor, Aggressive Construction Company, will not be allowed to bid for public works projects until 31 December 2023. and may be taken off the list of recognised tenderers for future government projects.

The Bureau said further sanctions could follow an investigation into the cause of the collapse. Such actions could include removing Aggressive construction from the list of approved public works contractors.

Chief executive, John Lee said the Labour Department has ordered the contractor in question to halt crane operations at all of its building sites. The department would also inspect cranes across the city.

The chief executive urged the legislature to act quickly to pass a draft law to raise the maximum sentence under the Occupational Safety and Health Ordinance from six months imprisonment to two years and the maximum fine from HK$500,000 to HK$10 million.

Possible structural failure for the base of the tower crane

“Therefore when there was an external force, it began to tilt towards one side. And because [the base] was not well connected, the crane’s base and the metal beams below flipped over altogether,” he said.

The engineer said the accident was rare in that the crane was not lifting a load when it toppled and might involve negligence.

Compensation for the deceased

The father and wife, along with other relatives of 41-year-old electrician Hui Man-ming – one of the three victims – came to the scene at 11 am today, noting that no relevant departments or organizations had reached out to them so far.

Authorities claimed to negotiate with Hui’s family this afternoon regarding the pension, while the relatives said they would seek assistance from the Association for the Rights of Industrial Accident Victims since they were in financial difficulties as Hui was the breadwinner.

t is also learned that family members of the other two dead workers, 26-year-old engineer Tsui Hok-pui and 22-year-old assistant engineer Pun Ho-yuk, arrived at the site around 2 pm today.

Two of the six injured workers who were sent to Queen Elizabeth Hospital were still in severe condition, four others were discharged from the United Christian Hospital after medical care.

A pension of over HK$300,000 will be granted to the families of the dead, and HK$100,000 in financial assistance will be paid to the relatives of the injured workers, said the Hong Kong Housing Society on Wednesday.

It was a rare case that we often see tower crane collapse due to overloading or improper handling. Looking at the photo, the cause might be the foundation, which either wrong calculations have been done during the design or the tower mast itself might have some defects as well. Furthermore, the site is quite congested and basically, everyone is working under the load, causing a high number of fatalities. Poor site management is definitely one of the reasons such incidents could have happened.