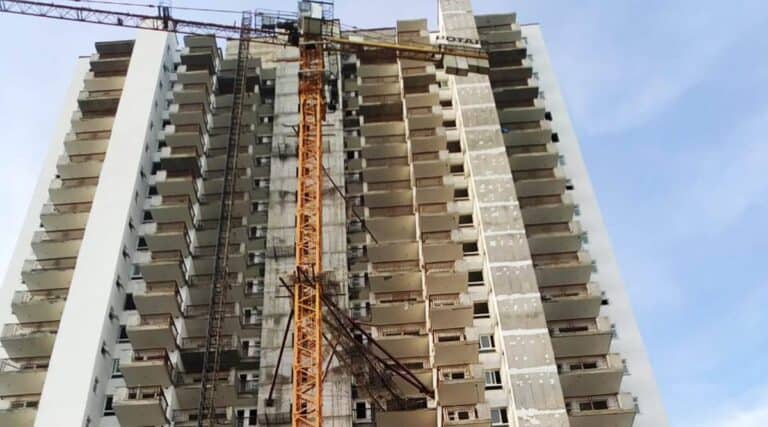 Four labourers died and one was seriously injured after they fell off the 17th floor of a residential society while completing construction work in Gurgaon’s sector 77 on Tuesday evening (2nd August 2022). Officials said legal action will be taken against the contractor for alleged negligence and not adhering to safety norms.

According to police, the incident took place around 5.15 pm when at least five labourers were dismantling a tower crane — typically used to transport construction material to upper floors — in a tower at Emaar Palm Hills. Police said the labourers were working on a platform on the 17th floor to bridge the tower crane to the scaffolding.

“The labourers had been employed by a contractor at the project. Prima facie, it appears that while working, the labourers slipped and fell from the 17th floor. Some safety equipment had been set up on the 12th floor, but it was not sufficient. One of the labourers fell on the safety equipment on the 12th floor and got entangled in it. He suffered injuries and is undergoing treatment. The other four fell to the ground and died. All four bodies have been shifted to a hospital. We are conducting an enquiry against the contractor and others whose negligence may have led to the mishap,” said ACP Manesar Suresh Kumar.

Police identified the four as Mohd Tahmid (27) Kamod (32), Naveen (28) and Parmeshvar (35). The injured person has been identified as Ramkishore (29). Police said the victims hail from Gopalganj and Kishanganj in Bihar. “The construction work had almost been completed and most of the workers had left the site. We are probing if labourers had been provided safety equipment,” said the ACP.

Amit Madholia, district town planner, enforcement, Gurgaon, who visited the site, said the department of town and country planning will initiate legal action against the contractor. “It appears that while connecting the tower crane, one end of the scaffolding was loose and the workers had not been provided with a harness belt, due to which they fell. Prima facie, the contractor did not follow safety norms. If the workers had a harness belt, they would have been saved,” said Madholia.

In a statement, an Emaar Spokesperson said, “We deeply regret the unfortunate and tragic incident and empathise with victims. Our thoughts and prayers are with the families of the deceased. The tragic accident took place during construction closeout work by the contractor in a completed tower in Palm Hills. We are further investigating the unfortunate incident along with our contractor to understand its cause.”

Tauqir, who worked at the site with one of the victims, claimed the labourers had complained several times to the contractor regarding the lack of safety gear, but the contractor did not pay heed to their demands.

In a similar incident on 9th June 2022, two labourers died after an iron beam allegedly broke and fell during shuttering work on the 19th floor of an under-construction commercial building on Golf Course Extension Road in sector 65. The victims’ families had alleged negligence at the time.