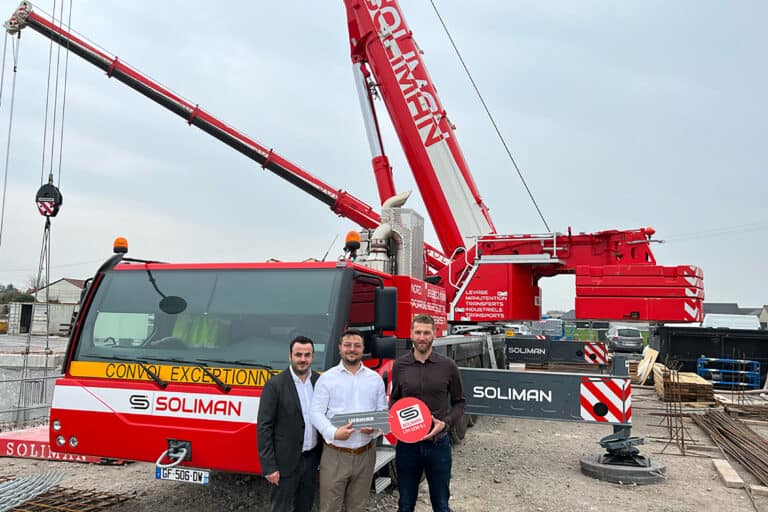 French crane contractor Soliman has taken delivery of a new Liebherr LTM 1230-5.1 mobile crane. The higher lifting capacities of the powerful, versatile 5-axle crane compared to other models in the same crane class, together with its particularly long boom, were just some of the criteria which made up the company’s mind to buy the new crane. Soliman is particularly pleased with the reliability of the products and Liebherr’s service. Another factor behind the decision was the high resale value of Liebherr cranes on the second-hand market.

French crane contractor has taken delivery of a new LTM 1230-5.1. One of the factors which persuaded the company to buy the Liebherr 5-axle model was its high resale value on the second-hand market. Soliman is also delighted with the reliability of Liebherr cranes: “We chose Liebherr when we decided to develop our fleet as a result of the reliability of Liebherr cranes and the fact that they often deliver higher lifting capacities compared to others in the same crane class”, explains Enzo Gigante, Commercial Manager at Soliman.

READ MORE:  Hiab to expand US production with growing demands

“We decided on the LTM 1230-5.1 from Liebherr because of its great boom length, versatility and high performance”, continues Gigante. The 230-tonne model features a very long 75-metre telescopic boom.  This can also be combined with a 43-metre fixed jib. That makes high radii possible, for example for hoisting loads over buildings. Its maximum hoist height is 111 metres. In addition, there is a wide range of auxiliary boom systems available for this crane model, which can be adjusted hydraulically as an option.

Operating in constricted conditions is possible thanks to VarioBase®

The LTM 1230-5.1 also sets new standards in terms of lifting capacity. Its VarioBase® and VarioBallast® features ensure that it is also ideal for working in constricted conditions. The LTM 1230-5.1 was the very first crane to feature an asymmetrical support system, known as VarioBase® Plus. This combines trapezoidal support with VarioBase®technology. It means that even higher lifting capacities are possible,  particularly over the crane’s rear outriggers.

The Liebherr LTM 1230-5.1 is ideal for working fully raised and at great hook heights, for example for erecting tower cranes or maintenance work for wind turbines. The Soliman team is active both in industry and on construction sites. The new LTM 1230-5.1 joins the higher lifting capacity segment within the  Soliman crane fleet. “The crane fits perfectly in the heavy load cranes within our fleet”, adds Gigante.

Soliman was founded in 1984 in the French city of Lille. Today, the company has two other outlets on the coast and in Picardie. That means that Soliman has a presence throughout the Hauts-de-France region.  The company has a workforce of around 40 employees and now has a fleet of 26 cranes, over half of which have been supplied by Liebherr. “We work in every sector where a crane is required, such as construction and general industry. Our employees are passionate and each of them has their own  strengths and specialities.”