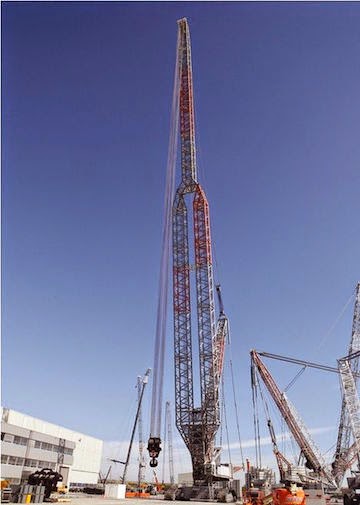 Liebherr has unveiled its new PowerBoom technology in October 2011, which its use can significantly increases long boom and jib lift capacities, while using very few non-standard components.

The PowerBoom or P-Boom will becomes an optional attachment on its larger crawler cranes range which has been first test on the Liebherr LR11350.

The PowerBoom has been designed initially as a superlift type device for the 3,000 tonne LR13000. It comprises of two main unique components – a butt-section (base boom adapter) – the lower P-Adapter that converts the single pivot point into a twin boom configuration and a top adapter – the Upper P-Adapter – that converts the twin booms back to a single boom for the tip. All the other boom sections are simply standard intermediate boom sections.

With this new configuration, its allows some parts of the load chart improvement having more than 50 percent load capacities on both the main boom and luffing jib. This is due to the greater torsional stiffness.

One of the advantages of the PowerBoom is that customers can buy one set of PowerBoom adapters which can be use over two or more cranes, or simply purchase the Power Boom at a later stage should they have a job that requires a stronger boom.

Liebherr mentioned that PowerBoom will play a major role in the future developments of its new cranes and just part of a whole range of measures is being implemented to optimise lifting capacities and to extend the application spectrum of various modes, such as in the area of wind turbine assembly with cranes in the 600 to 750 tonne range. 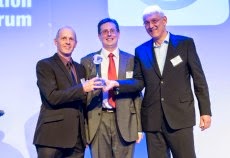 The prize was award in recognition of Liebherr’s PowerBoom concept, which the ICEF jury said significantly increase load capacity whilst offering increased economy and flexibility for users.

The PowerBoom concept staved off competition from six other innovative designs to win the award. The prize’s scope covered components and part systems for construction equipment that have been available on the market since January 2012.