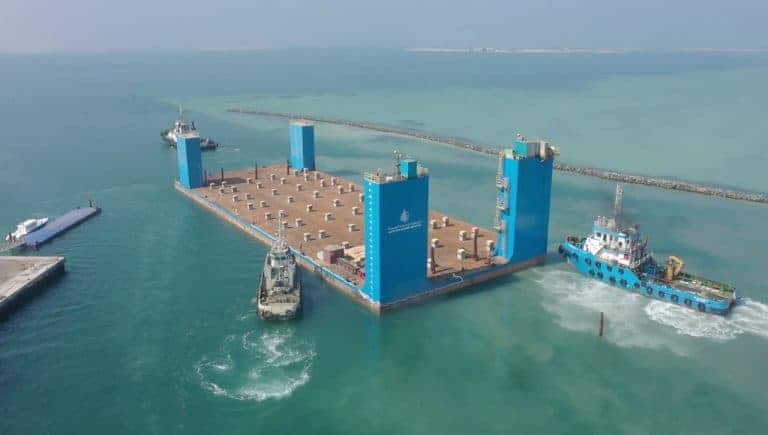 Built at Zamil Shipyard in the port of Dammam, two floating drydocks, intended for maintenance and repair works of naval crafts in Saudi Arabia, are being commissioned by Constructions Mécaniques de Normandie (CMN), a French naval ship design and construction company.

In the concept stage, the team proposed a solution for the float-off that has never been performed in the Kingdom before. The solution entailed the use of a large floating dock with the capability to perform float-off directly at the jetty. The use of the proposed dock eliminated the traditional offshore float-off and related logistics. This gave the client a commercial advantage that in addition to the costs, saved a significant amount of time.

A thorough transport and marine engineering, multiple risk assessments and warranty surveys were performed to ensure safe and efficient execution. The floating dock, mooring and ballasting equipment were mobilised from UAE along with a specialised team to execute the operation. It was performed in accordance with the requirements of the client, warranty surveyors, shipyard and port authorities and environmental regulations.

Each drydock, weighing 1,450t and measuring 85m long, 34m wide and 11m high, was safely transported from the fabrication facility to the quayside, then loaded out onto the floating dock using 96 axle lines of Self-Propelled Modular Transporter (SPMT), before being floated off successfully at the right time and tide.

Commenting on the operation, CMN’s Transfer of Technology Manager said: “Congratulations to the entire Mammoet team and its subcontractors that have worked so hard during these days. The temperatures were high and some were fasting during Ramadan – yet, the float-off operation has been accomplished with great professionalism. We have been planning this operation together for some time but due to the COVID19 pandemic we had to be inventive and find solutions and avoid delays. The job was well done. Pleasure to have been working with such a great partner as Mammoet.”