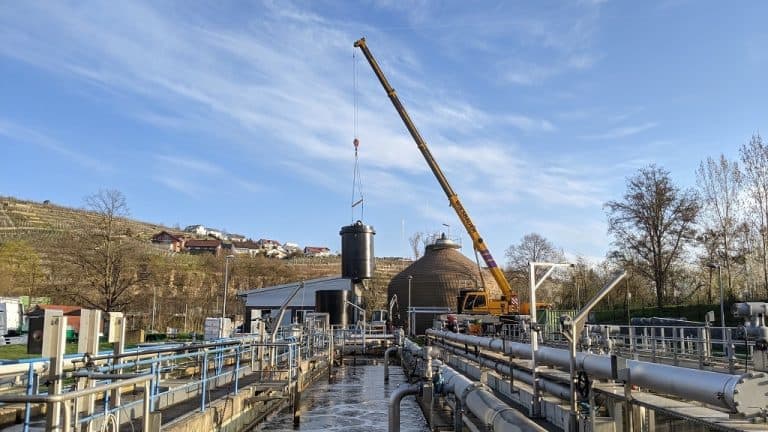 Enjoying clean water from the tap is something we just take for granted, but a lot of high-tech work goes on behind the scenes to get it this way. This is where huge precipitant tanks in sewage treatment plants have a big role to play. A Tadano HK 40 was recently able to demonstrate its strengths in lifting one of these tanks while also contending with on-site spatial restrictions.

Substances known as precipitants are used in the purification of wastewater in sewage treatment plants. They eliminate phosphate in the water, which can lead to excessive algae growth and thus negatively influence the purification process. This process takes place in special precipitant tanks, which is precisely what the Besigheim sewage treatment plant, located between Heilbronn and Stuttgart, wanted to have retrofitted alongside its existing tank.

Conaqua Wassertechnik GmbH was commissioned to handle the project: The company from Röthenbach in Franconia has specialised in dosing technology and plastic apparatus construction for sewage treatment plants and waterworks for almost 25 years.

Equipped for all eventualities

Since these precipitant tanks have enormous dimensions, robust and powerful crane technology is needed to meet the requirements for setting up and lifting. Conaqua commissioned the crane service provider Wiesbauer GmbH & Co. KG, headquartered in the immediate vicinity of the Besigheim site in Bietigheim-Bissingen, to transport and lift the tank.

Wiesbauer has been offering complete solutions for heavy-duty and crane work for over 60 years. Its fleet of cranes includes crane models for almost every application, including mobile cranes, crawler cranes, folding cranes, mini cranes, industrial cranes and pick-and-carry cranes.

For Wiesbauer planner Christoph Rösser, there was no doubt that setting up the precipitant tank in Besigheim was a job for the Tadano HK 40 truck mounted crane: “Confined conditions and a tank weighing almost 3 tonnes… now that’s what we call an opportunity for our HK 40 to show exactly what it can do.” On-site, both the tank, which measured around 5 metres high and 3 metres in diameter and the collection tray had to be moved as close as possible to the installation site on a low-loader.

Once in place, the tank and tray had to be set up vertically with the HK 40 and lifted onto the foundation slab. What was special about this task was that it called for the use of a crane traverse. “The crane lugs on the cylinder are attached in such a way that they do not allow any diagonal pull. This is specified by the tank manufacturer. With this in mind, we had to rely on the traverse,” explains crane driver Silvia Flinspach.

For the experienced crane driver and her HK 40, this was a challenging but feasible task. Thanks to its compact dimensions of around 11 metres in length and 2.5 metres in width, the approach and set-up on the narrow roads around the sewage treatment plant proved perfectly straightforward. The tank was lifted with a reach of 15 metres. And since the 40-tonne crane arrived equipped with maximum counterweight, lifting almost 3 tonnes was no problem for the Tadano crane.

“The HK 40 is one of the strongest cranes in its class, so lifting a tank like this and its accompanying tray is simply par for the course. And thanks to the intuitive and sensitive controls, positioning the load with centimetre precision was no problem either,” explains Flinspach, since the tank had to be lifted perfectly into the precision-fit collection tray. A task with little room for manoeuvre, but an easy one nevertheless for Silvia Flinspach and her Tadano HK 40.

PrevPreviousTadano launched CREVO 250 G5 for the domestic Japanese market
NextTadano ATF-220-5.1 for use in the Hamburg metropolitan regionNext