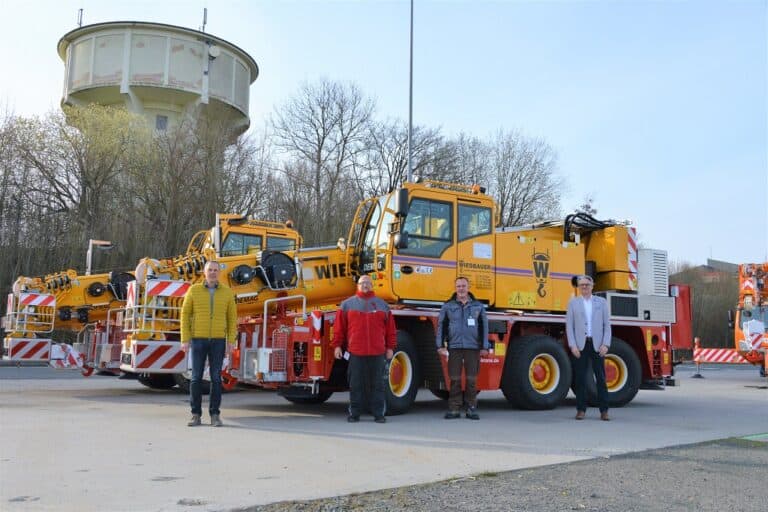 Why wait? That is the question that the team at Wiesbauer asked themselves when taking delivery of two new AC 45 City* cranes at the Zweibrücken plant. And the answer was clear, as one of the two cranes was sent to take care of its first job on the very first workday after that. The two City cranes were handed over by Tadano Sales Manager Michael Zieger and Tadano Demag GmbH & Tadano Faun GmbH CEO Jens Ennen in person. They were picked up by crane operators Uwe Wahl and Walerij Schneider.

The AC 45 City’s first job took it to a steel wholesale distributor in Neckarsulm. “Once there, our new AC 45 City had to install a crane runway indoors,” reports Christoph Kriegel, who is part of Wiesbauer GmbH & Co. KG’s technical field staff and was in charge of the project. One particular challenge was the building’s low ceiling height, which would have put a slew of other cranes in a bind – but not the AC 45 City. “It was specifically for cases like these that we ordered the crane with the optional runner, which makes it possible to reach the maximum lifting height even under these types of conditions. In fact, it’s worth mentioning that the runner, with its large lifting capacity of up to 25 tonnes, was an important factor in our decision to get the AC 45 City,” Christoph Kriegel highlights.

With its runner, the AC 45 City was perfectly prepared to install the overhead crane. The components included a 14-tonne girder, which was the heaviest load, and two additional girders for the trolley. The runner proved to be absolutely indispensable for all of it, but especially for those last two girders. Even though there was very little space under the ceiling, the AC 45 City made it a breeze to install the crane runway: “The crane’s rope pull system, which makes it possible to smoothly telescope the boom in perfect synchrony, was essential to making the work go smoothly and safely. In fact, it ensured that the defined lifting capacity would be maintained throughout the entire telescoping operation,” Christoph Kriegel explains. The fast and safe rope pull system not only saves time for customers but also reduces costs, making the AC 45 City particularly cost-effective.

“We had an AC 40 City hard at work for many years, and as far as we’re concerned, the new AC 45 City represents some real technical progress when compared to its predecessor,” Christoph Kriegel highlights. He goes on to list a series of decisive advantages: improved telescoping ability under load, a reinforced runner, and conformity to the latest engineering standards. Add to this the fact that the AC 45 City continues to be the most compact crane of its lifting capacity class despite its powerful performance characteristics, and it is obvious why the crane was his first choice.

His project report is just as positive: “The new AC 45 City handled its debut like a champ: Our customer is more than happy, and so are we – what else could anyone ask for?”

With the unification, Tadano introduced a new naming formula. The machine in this article is now called Tadano AC 3.045 City.