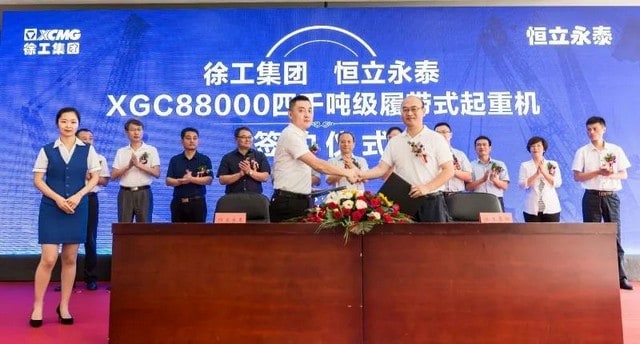 Vice president of Sun Jianzhong fully affirmed the 4,000-ton international standing, brand advantages and construction cranes since put into engineering applications made, and encouraged to be strict Xugong crane raised floor grid Wang Min, chairman of the “three can have a” high-quality development Requirement, paying close attention to customer needs, and deeply promoting value marketing to build a high-end brand in the crane industry.

From the first 4000-ton crawler crane to the actual engineering application, to the second 4000-ton crawler crane to complete the contract, 5 years, successfully implemented more than 1,500 tons of hoisting more than 40 times, the total weight is close to 100,000 tons, this The distinctive Chinese-made business card has a footprint that spans more than half of China, and has taken on the responsibility again and again, and successfully completed the mission again and again.

In 2013, the 4,000-ton crawler crane XGC88000 appeared in Yantai Wanhua Industrial Park for its first heavy lifting. In this Sinopec refinery, a propylene tower on site which was 14.4 meters in diameter and 118 meters in length and a total weight of 1,680 tons needed to be hoisted upright. The entire hoisting operation only took five hours to complete. If a smaller crane were to be deployed, it would take at least three months for the components to be hoisted separately and welded piece by piece, not mentioning the risk of working at height. which significantly reduces the time needed if a smaller capacity crane is utilized.

One month later, XGC88000 was transferred to Ningxia to hoist a Fischer-Tropsch synthesis reactor which was 54.4 meters high, 9.6 meters in diameter, 2155 tons in weight for the Shenhua Ningmei Coal’s  4 million tons/year coal indirect liquefaction project. The entire hoisting operation only took two and a half hours.