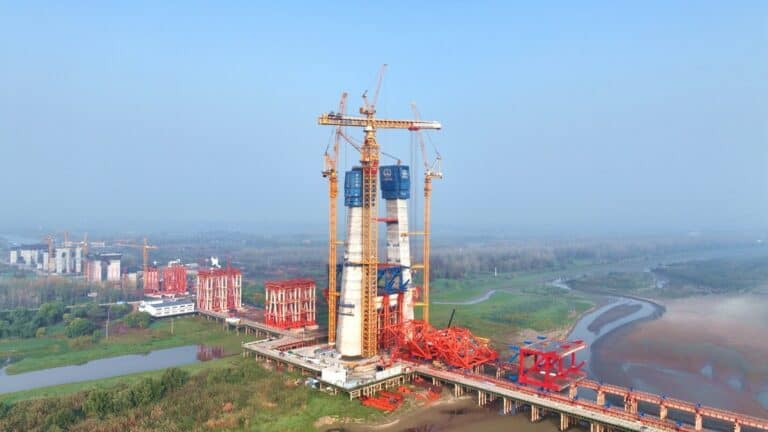 XCMG sent off the second unit of XGT15000-600S, the world’s largest tower crane jointly developed by XCMG and China Railway Major Bridge Engineering Co., Ltd. (MBEC), on December 8 from its smart manufacturing base in Xuzhou, China. It will serve in the construction project of Changtai Yangtze River Bridge, the world’s largest diamond-type cable-stayed bridge.

The XGT15000-600S is a super large tower crane designed and customized to accommodate mega-scale bridge construction projects. The first unit, which officially rolled off the assembly line in June 2022, was deployed to the Chao-Ma railway bridge project of the Ma’anshan Yangtze River Bridge (including railway and highway). The second unit, now being delivered to the Changtai Yangtze River Bridge, will complete a series of steel tower hoisting and installation tasks, including lifting the maximum weight of 300 tons to a height of over 300 metres.

As a major breakthrough in bridge construction equipment development and a key milestone for the tower crane industry sector, the XGT15000-600S not only demonstrated XCMG’s industry-leading strength of intelligent manufacturing and brand influence but also set a new benchmark of industry cooperation for super engineering projects.

READ MORE:  Hoisting of the third steel tower of Jinhai Bridge is completed

Check out the video of the tower crane load test below.