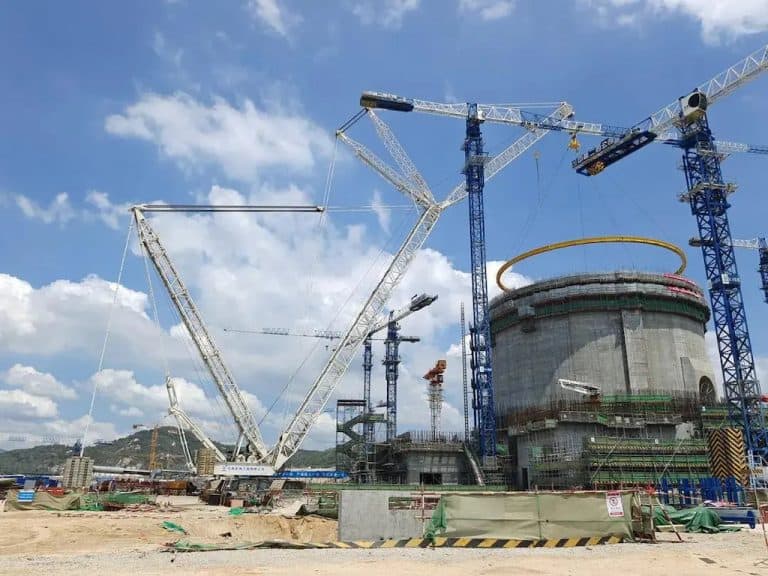 On July 15, 2021, China Nuclear Engineering & Construction Corp (CNECC) has completed the hoisting of the first ring support beam module for the first Zhangzhou Nuclear Power Unit 1 for the Hualong One reactor. It is also the 15th nuclear construction project that CNECC has participated in.

The hoisting total weight of the ring bolster is 157 tons, the seating radius is 82 meters, and the height is 45.2 meters. It is hoisted using a Demag 1600-tonne crawler crane, assumed to be Demag CC 9800 (From the looks of the superlift attachment)

The operation started at 6 am in the morning as the rigger started the rigging of the ring support beam. After the wind speed on the site met the safety conditions, the hoisting was officially lifted at 9:38 am.

Zhangzhou Nuclear Power Unit 1 is the first unit to be mass-constructed in China’s domestic “Hualong One” unit.

The overall hoisting of the ring bolster is also a domestic “first”.

Compared to conventional hoisting section by section, the integrated hoisting allow 9 sections of the ring support beam to be assembly on the ground, providing many advantages including reducing personnel from working-at-height, reduce complex assembly at the top as well as reducing the time taken for the civil engineering and construction team.

In order to ensure the operation go smoothly, all participating members of the Zhangzhou Project Department of China Nuclear Machinery Engineering worked together to overcome the technical difficulties, carefully checked and implemented every step to carry out the hoisting in strict accordance with the plan.

Hualong One is China’s 3rd Generation pressurised water nuclear reactor that was jointly developed by China General Nuclear Power Group (CGN) and the China National Nuclear Corporation (CNNC). The Hualong One is based on the three-loop ACPR1000 and ACP1000, based on the french design M310. In early 2014, it was announced that the merged design was moving from preliminary to detailed design.

The expected output of Hualong One will be 1170 MWe gross and 1090 MWe net that has a life expectancy of 60-years. The nuclear system will use a combination of passive and active safety systems with double containment protection.