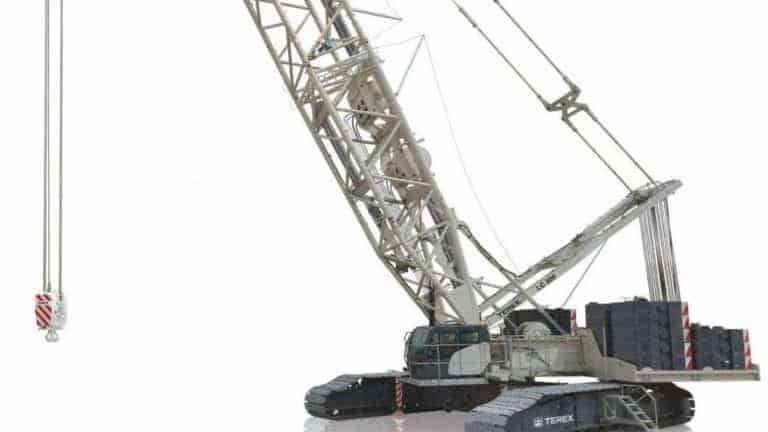 1st November 2016 – Terex acquired the Jinan plant when it purchased 65% majority stake in Shandong Topower Heavy Machinery Company in August 2010, which built lattice boom crawler cranes between  70 to 360 ton class. However, business are not gaining its market shares and in November 2014, Terex took over the rest of Topower equity and started their own line of crawlers.

After the production of CC line in Germany, HC line in United States, Terex has create a new LC line for the North American market. The first crane in this new line will be called LC 300 or LC 330US in North America. Demag has already produced three prototypes of the 300 metric ton capacity crawler, which is based on the proven CC line Demag crane design.

The engineering team has focused on six design elements: mainly efficient transport, ease of setup, efficient counterweight, operator comfort, efficient operating costs and state-of-art operator aids. With much thought put into consideration, the transportation of the entire crawler with its main boom can be hauled in 16 truckloads (of course that also depends on the configuration and different state road regulations)

In fact, the involvement of the designing of this crane start as early as 2010, back at Jinan, China facility. That was when Terex had 65 percent investment in a China crane company to produce the Toplift line of crawler cranes for the then booming China market, which did not turn out optimum. In 2014, Terex takeover the shares to become a 98 percent shareholder and gaining full control of the operations in Jinan.

The LC 300 will be featured at ConExpo in Las Vegas in March 2017 and first units are targeted to the North American markets, where demand for this capacity class is good.

The crane will have a two-year warranty as a standard.

The counterweight system uses unified counterweight plates and counterweight slabs, and it feature a centre borehole on each counterweight for installation and locking purpose. There is no central ballast, but a long counterweight tray on both side with two stacking space. This efficiently reduce the stack height thus lesser climbing, lower center of gravity and person who attaches or removes the slings from the counterweight can now easily step on the other stack instead of going up and down the crane. The different boom configurations corresponds to three different counterweight stacking position.

The main car body weighs 44.8 ton (98,770 pounds) and its 3.16m (10ft 4.5″) tall. On a typical US trailer, the loaded height would not exceed 4.19m (13ft 9″). One of the new features are stacking blocks on top of the boo section that allow user to stack the boom sections when space is limited or when the boom sections don’t arrive in the designated order.

LC 300 is also designed with self-erecting outriggers that allows for easy loading / unloading and assembly of the crawlers. One of the most exciting feature will be assembly the main boom up to 54 metres (177 feet) free in-the-air.