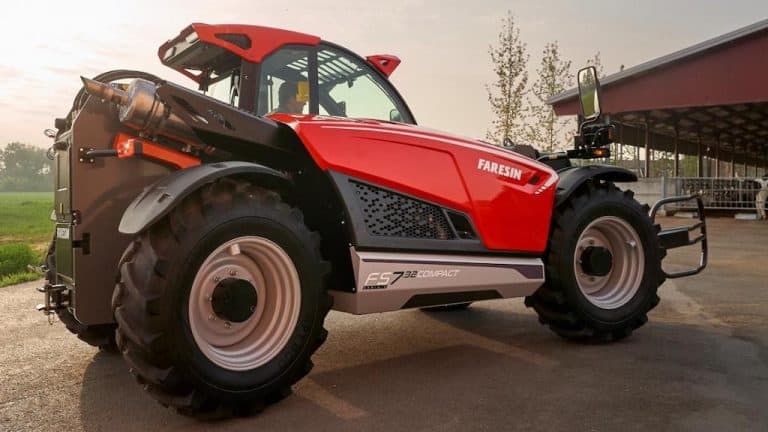 Faresin has announced a new generation of telehandlers starting with the launch of the first model, the seven metre/3.2 tonne FS 7.32 Compact.

Specifications are limited at this point, but with a maximum lifting capacity of 3.2 tonnes and a working height of 7.1 metres, with a forward reach of around 3.65 metres, Overall width is 2.1 metres with an overall length of 4.6 metres.

The company says that the new model is aimed at the ‘top of the ‘compact market’ and has been designed from the ground up, with particular focus on ‘high performance, connectivity and sustainability.’ Part of the company’s forward industrial plan, the new telehandler has been designed to appeal to the agricultural, construction and industrial market sectors.

The FS 7.32 transmission can either be supplied with a 45 percent self-locking limited slip differential or a hydraulically operated differential lock. A choice of five Stage V engines combine with a new ‘Ecodrive’ dual range hydrostatic transmission, which permits a 40kph top road speed while the low range allows the slowest of creep speeds for carrying and positioning heavy loads. A single range transmission is available as an option with a maxium road speed of 30kph. An ‘Auto Start-Stop’ function – which cuts off the engine when the operator leaves the cab and restarts it when they return – comes as standard.

The company has also employed an industrial designer to add a more distinctive and sophisticated look for the new generation product range. The new side covers are not only a design statement, they also improve the airflow into the engine compartment while maximising visibility from the cab. The layout of the engine and components have also been improved to provide better access to all routine service areas. The cooling system incorporates a new integrated exchanger and electronically controlled fan system with a reverse airflow mode. It is said to both reduce energy consumption and provide lower noise levels.

A choice of cabs are available – the standard one which gives the machine and overall stowed height of 2.25 metres, with the option of a low level cab that reduces the overall height to to just over two metres, a feature that is said to be a requirement in the growing poultry farming market. Other features include a seven inch touch screen display, pneumatic suspension seat with built in joy stick, full LED lighting, including a neat courtesy light on the cab step. A range of auto detect attachments are available that can be installed or changed from the cab with a hydraulic locking cylinder.

Company owner Sante Faresin, said: “The market is increasingly asking us for sustainable products, less consumption, less emissions, more digitalisation, more performance and more beauty. I would like to thank all the staff at Faresin for having created this product.”

The first model will be shown at the EIMA exhibition later this year, while further models will be launched at bauma and Agritechnica in 2022. We will of course update this as and when we receive its full specifications.