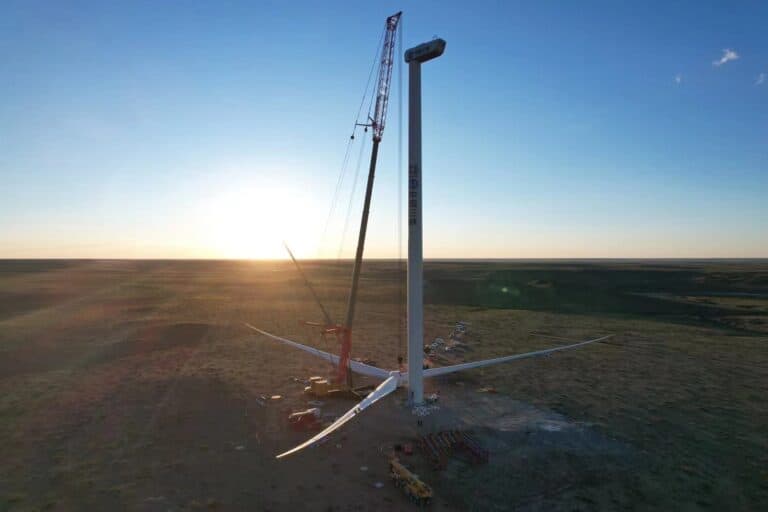 On the night of 15th August, Sany SAC24000T mobile crane completed the installation of the entire impeller components onto the 105-metre-high nacelle of a 6.25MW wind turbine in Ulanqab, Inner Mongolia. It marks the milestone of the first successful lifting operation for SAC24000T. The crane was owned by Ningxia Julishen Construction Machinery Group Co., Ltd.

The mobile crane arrived at the wind farm and began its assembly in the afternoon. The outriggers, turntable, luffing cylinder and basic arm completed their assembly in four hours.

Began the installation of superlift, jib attachments and hook block. As it was raining during the assembly operation, the progress has been slightly delayed.

Prior to the lifting operation, the owner requested a 110% overload test. The SAC24000T lifted a load of 42 tonnes (52 tonnes including hooks), derrick the boom to a working radius of 60m and swung 360 degrees. It holds in position for 10 minutes to observe any abnormalities. The mobile crane passes the test.

The first three wind towers are installed. The weight for the first, second and third tower components are 98.5 tonnes, 78 tones and 65 tonnes respectively. SAC24000T adopts the working configuration of 53.2m main boom and 44m jib with 240 tonnes of counterweight. Each tower section took only an hour to install, including the time for connecting the screws between each component.

Due to the rain, soften the ground of the grassland and additional access-making preparation was required. Service engineer Zhi Lei move the gravel on foot for two to three kilometres and the fourth wind tower finally arrived at the wind farm.

The last wind tower (62 tonnes) was installed and they immediately proceed with the installation of the nacelle. The total weight of the load is 167 tonnes, with the nacelle weighing 152 tonnes and the spreader attachment and hook block weighing 15 tonnes. The working radius was 24 metres and given the rated lifting capacity of 212 tonnes, it achieved a load utilization rate of 79.2%.

Due to the epidemic, the transportation of the blades has been put on hold for several days. The rotor blades finally arrived at the job site and the assembly began.

Due to the strong wind for the past three days, the lifting operation could not be carried out. The wind finally died down at 8 pm in the evening. Using this period of time, the SAC24000T hoisted the rotor blade assembly and successfully connected it to the nacelle at 9 pm. The first wind turbine installation using SAC24000T has been completed.

The pressure is on to mobilise the crane to the next location and the crane disassembly is carried out. Due to the variable mast technology, the 44m jib was removed in less than an hour. The superlift attachment comes with a pinning system design and it was removed from the crane in one and a half hours. The total operation took less than 3.5 hours to remove the jib, superlift and 240 tonnes of counterweight.

The SAC24000T had to travel a four kilometres journey before reaching the next wind turbine site. With the outriggers and main boom on the carrier, the mobile crane travelled with a total weight of 284 tonnes and passed through areas with 15% gradient slopes.

Instead of the standard R445 used on most mobile cranes, they have selected R505 tires coupled with Kessler heavy-duty axles. The carrier has 6 mechanical drives and 2 hydraulic auxiliary drives, providing a 30% driving capacity over R445 tires. The mobile crane is also equipped with a tire pressure monitoring and centralised lubrication system, allowing the crane to travel through the rough conditions in the wind farm.