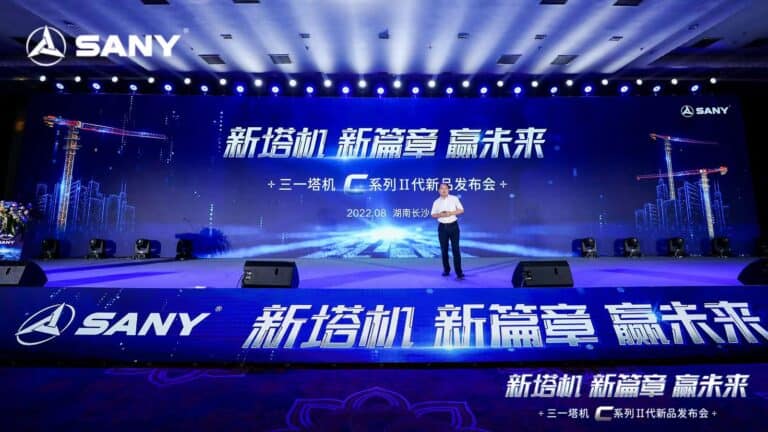 Safety is one of the user’s pain points in the tower crane industry. The C series II generation products have comprehensively enhanced the durability of the products. The standard section, boom, tower head and hoisting mechanism have been tested for material fatigue over 30,000 cycles, and they will not fail during its useful lifespan. Zero-speed hovering and intelligent detection of lifting and braking torque to eliminate the risk of hook block slipping off. There is also a swing anti-lock braking system (ABS), which is not afraid of accidental power failure.

In addition to the safety, the C series II products also truly start from the daily needs of users, simplifying operations and improving work efficiency. Slip-type operator cabin for easy transition. Foldable-type guardrails for quick installation, and the tower can be installed in just 4 hours. The wiring harness is integrated, and the wiring only takes 10 minutes. There is also calibration-free technology and intelligent calibration of the operating range, which effectively solves the industry problems of illegal and inaccurate calibration.

Another major focus of the second-generation products of the C series is the humanized design, and the cab space is increased by 15%. Equipped with a stepless control lever, the controllability and micro movement performance are improved by 30%. Ergonomics meet the needs of 95% of drivers worldwide.

What is even more surprising is that the second generation of C series products has taken a key step in the development process of “intelligence”. It realizes intelligent control and can perform high-altitude operations on the ground. In order to prevent collisions, it supports the automatic formation of an operation network and delineates the safe range of tower crane operations. In addition, the intelligent mast climbing and intelligent operation system makes the product easier to users.

The update of the C series is an upgrade of the Sany tower cranes. Since its establishment in 2019, Sany Tower Crane has been growing in a rapid pace, doubling its production annually. At the current moment, they have already extended their tower crane range to flat-top and luffing type, covering a wide range between 80 tm to 600 tm.

“To be the best tower crane in the world, Sany will not only meet the basic requirements of safety and reliability, but also provide intelligent and comfortable experience, with the principle of ‘all for customers, all From the innovative’ business philosophy, to create greater value for users.”

In order to accelerate innovation, Sany Tower Crane actively conducts simulation tests, increases software investment, forms an advanced R&D model driven by data, and has the second largest R&D center in the world. At the same time, it has invested 1 billion to build a “lighthouse factory” and a “green factory”. 70% of the technological process is completed by intelligent robots. Using the big data platform of the Internet of Things, the online monitoring of production status, product quality and the whole process is realized.