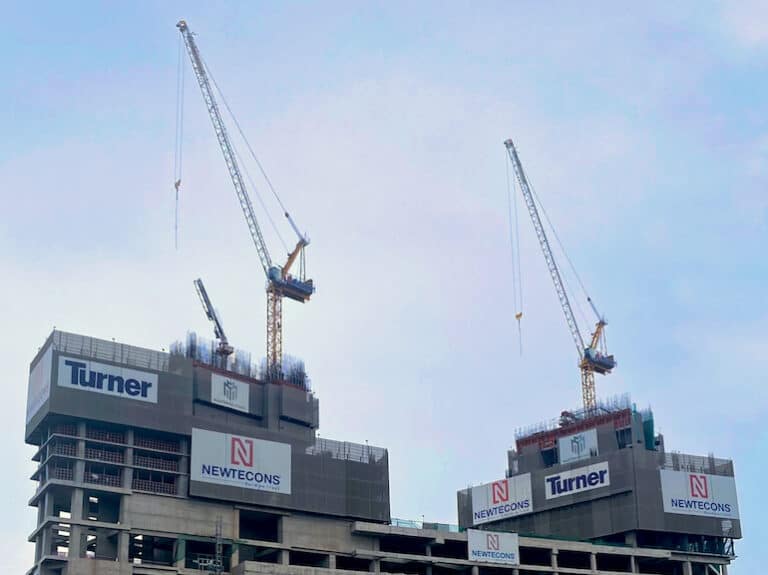 One of the future architectural highlights of Ho Chi Minh City’s District 1 is taking shape thanks to the compact dimensions and internal climbing capabilities of a pair of Potain MCR 295 luffing jib tower cranes. Sold by Potain distributor Minh Chi to Newtecons, one of Vietnam’s biggest contractors, the cranes were delivered to the job site in March 2021 and are midway through the construction of the prestigious One Central Saigon project.

Consisting of two 240 m-high towers connected with a podium, the US$500 million design will provide a modern aesthetic while representing Vietnam’s mythical dragons — each one hovering high in the sky for a superior view of the city and holding a ‘pearl’ in its mouth to symbolize the vitality of this growing economy.

With one per tower, the pair of 25 t capacity MCR 295 cranes have completed the construction of the podium and are now rapidly rising with the structure. Configured with the industry-leading BC60R floor-climbing mast system, the cranes achieved an impressive initial working height of 52.2 m, a set-up that few competitor cranes could match. The cranes will eventually reach a final working height of 260 m on 2 x 2 m mast sections.

On the One Central Saigon project, the Potain cranes are leveraging their smart and compact design to lead construction on the high-rise development. Fitted with an optimized counter jib of just 8.3 m, the cranes are supporting 50 m jib configurations — at which distance they can lift an impressive 4.5 t.

The VVF luffing system provides extremely accurate movements and enables the rapid raising of the jib, requiring less than two minutes to travel from 15° to 86°. At its maximum angle, the crane’s design means that a minimum working radius of 5 m can be achieved in cases where the crane is configured with the full 60 m jib.

“We have enjoyed a great deal of success with internal climbing cranes in recent years, and the reduced cost of transport is just one of the major benefits of the Potain MCR 295,” said Nguyen Nam Duong, equipment manager, Newtecons. “Not only do the cranes save money for developers and investors, but they diversify construction options, offer a better load capacity than external models, and enhance operator safety, especially during the stormy season. Newtecons has a ‘build on trust’ philosophy and having the very best construction equipment is an important part of that.”

Covering an area of 8,600 m2, One Central Saigon consists of a 55-story West Tower and 48-story East Tower, plus a seven-story podium (including three floors for parking), creating a total floor area of 195,000 m2. Managed by the Ritz-Carlton Saigon, it will incorporate office space, apartments, a 6-star hotel, and a shopping mall. It is expected to complete by the end of 2023.