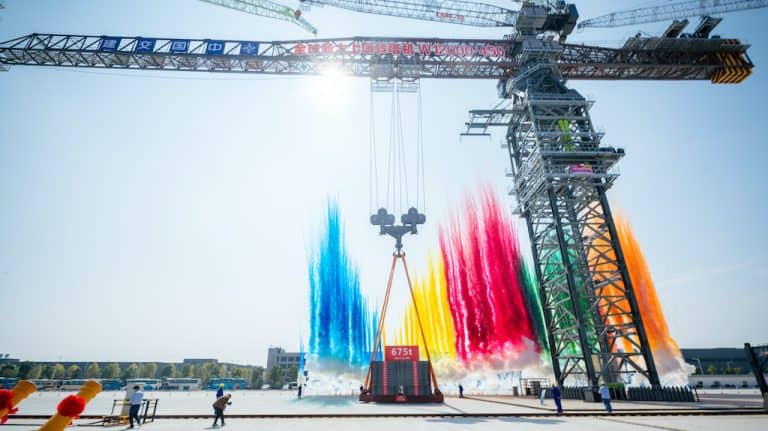 On the 25th of October, a ceremony was held at Zoomlion’s Changde tower crane smart factory to celebrate the rolling off of the world’s largest tower crane – W12000-450.

According to Zoomlion, a Chinese manufacturer based in Changde, Hunan Province, construction projects are getting taller and wider, and parts are getting heavier, which is why tower cranes also need to increase their size. The company’s recently-launched product, the W12000-450, was specifically created for the Changzhou-Taizhou Yangtze River Bridge, a massive project that will integrate a highway, an expressway, and an inter-city railway.

With a 4,000-ton weight and a 12,000 tonne-meters load moment, the W12000-450 became the world’s largest top-slewing tower crane and the first of its kind to exceed 10,000 tonne-meters. This enormous machine also boasts impressive capabilities: it can lift equipment weighing up to 450 tons, and its maximum lifting height is 1,312 feet (400 meters). Zoomlion says this equals the weight of 300 cars, lifted as high as 130 stories, all in one go.

Designed according to the bridge which has 400-tonne of precast concrete components that need to be hoisted to a height of nearly 400 metres, the W12000-450 fits perfectly for the job.

The tower crane will be erected at Pier 5, the main tower of the bridge, assisting to install the middle and upper tower precast columns.

Even before completing the existing, project, the W12000-450 will be scheduled to build another bridge – the Anhui Chaoma Yangtze River Bridge which is the world’s largest trio tower cable bridge.

Without any precedents model for the structure design, Zoomlion had to put together a technical team to design the tower crane from scratch, displaying their experience and innovation which has accumulated over the decades in crane manufacturing.

The W12000-450 tower crane uses Zoomlion’s unique innovative technology to design its flat-head single boom, rod pinning system and jacking cage. Performance is a must, but Zoomlion also included other aspects, including transportation, assembly and disassembly when designing the crane.

Building the behemoth tower crane is a huge challenge. With the maximum size of a single piece measuring 14m in length and 6m by 6m in width, the 66 tonnes components require a total welding seam of 5.8 kilometres! With their deep technical knowledge in R&D and design, Zoomlion took on the challenge to build the WT12000-450 which uses almost 4,000 tonnes of steel.

In their ultra-large tower crane smart factory, they have used digitalized welding machines to tackle ultra-thick plates welding, invested more than 10 high precision CNC machines and super-large water-based heavy-duty marine-grade coating to ensure the components are well protected from rusting when working along the sea.

The conventional process might require at least 12 months to complete a tower crane of this sheer size, Zoomlion’s smart factory shortened the delivery cycle through its intelligent flexible tooling system.

The advanced layout of production capacity also reflects Zoomlion’s insight and leadership in the tower crane market. In recent years, with the development of new infrastructure and the rapid development of prefabricated buildings in China, the use of large tower cranes has become more and more widespread.

Industrial experts have noted that with the W12000-450 heavy-lift tower crane aiding China’s industrial heavy-duty and construction industrialization, it has increased the influence and competition of Chinese brands in the global market.

The big tower era is evident in the future for the domestic market.

While I checked at the Guinness World Records, the largest tower crane recorded was the Kroll K-10000 tower crane that is Danish made which is capable of lifting 120 tonnes at 82m in standard configuration. The tower crane has held the title for over 40 years and this could mean that it is contended by Chinese’s Zoomlion for the title. Let’s see if Zoomlion applies for it later on.