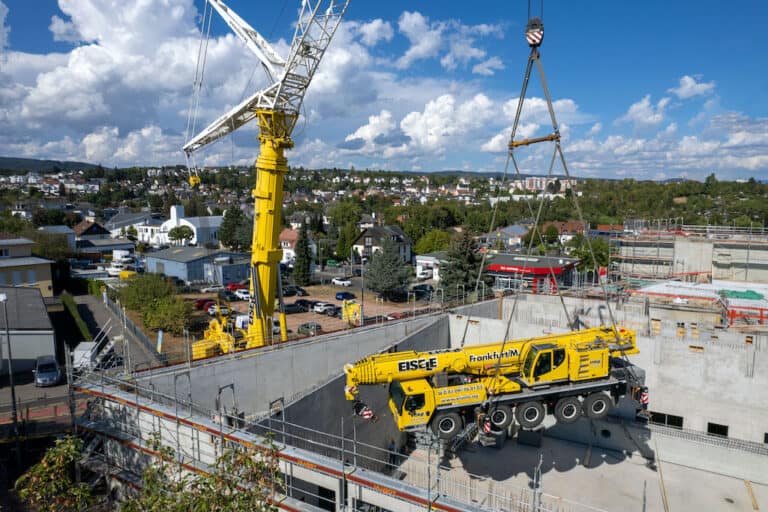 The Eisele AG – Crane & Engineering Group based in Maintal in Hesse was looking for a Liebherr LTM 1750-9.1 mobile crane to help install 30-tonne concrete girders in a new sports hall in  Wiesbaden. The job required a radius of almost 60 metres. But with no suitable mobile crane available, the resourceful Hessians came up with a clever solution. An LTM 1130-5.1 was lifted into the under-construction building to assemble the four concrete elements located furthest from the crane. The remaining trusses could then be installed without any problems using a  Liebherr 500-tonne mobile crane.

The order books in the crane industry in Germany are currently full to bursting. Mobile and crawler cranes are experiencing huge demand – a fact that caused some problems for the specialists at Eisele AG this summer. The company had been looking for a large mobile crane in the 750-tonne class for an important project. Mighty trusses needed to be placed as part of the construction of a new gymnasium, in some cases at extreme distances. “Clearly a job for an LTM 1750-9.1,” explained Tino Perschmann, a member of the external technical team at Eisele. “But  despite searching far and wide, we simply couldn’t find an available crane of this type.” The solution was finally found within the company’s own fleet of vehicles. The plan was to use Eisele’s largest mobile crane, an LTM 1500-8.1, to lift a small 130-tonne mobile crane into the construction site, which would then directly install the trusses located furthest from the 500-tonne machine.

The plan was soon put into action. However, certain other requirements on the construction site also proved challenging. Under extremely cramped conditions, it was necessary to erect the LTM 1500-8.1 on the road running along the site, which had a steep gradient of almost ten per cent. For this purpose, after the initial lifting via the support cylinders, the crane’s axles were moved all the way up and the tyres underpinned with heavy Bongossi timbers up to 60 centimetres high. With the crane placed on top, the outriggers could be retracted and further underpinned to achieve the final outrigger height. When the undercarriage was positioned horizontally, the driver’s cab was high in the air and could only be reached via a ladder.

After attaching the 28-metre luffing lattice jib to the telescopic boom on the 500-tonne crane, the work could begin. The plan worked. First, the four concrete trusses were lifted into the site for installation by the smaller crane. Attached to the support spars, the LTM 1130-5.1 itself was then hoisted over the approximately eight-metre-high wall into the future sports hall. There, the powerful 5-axle crane grabbed the trusses, which were over twenty metres long, and finally positioned the four components. Back out of the hall, it went again at the hook of the LTM 1500-8.1. Then the 500-tonner finished the job by installing the remaining floor trusses.

The eight-year-old LTM 1500-8.1 is currently the most powerful lifting unit in Eisele AG’s fleet of around 30 cranes, including mobile construction cranes from Liebherr. The crane and heavy load company based in the greater Frankfurt area was taken over by the Hüffermann Group last year.

As a full-range supplier in the field of cranes, heavy lifting and engineering, the group, based in Wildeshausen in Lower Saxony, now has over 200 mobile cranes as well as crawler cranes with lifting capacities of up to 1,000  tonnes. In addition to Eisele AG, the companies Hüffermann Krandienst GmbH, Autodienst West Ganske  GmbH (Maintal / Frankfurt) and the Thömen Group with its headquarters in Hamburg and branches in  Brunsbüttel, Potsdam and Leipzig, which used to operate independently, are now also under the umbrella of the Hüffermann Group, which has over 500 employees in total.