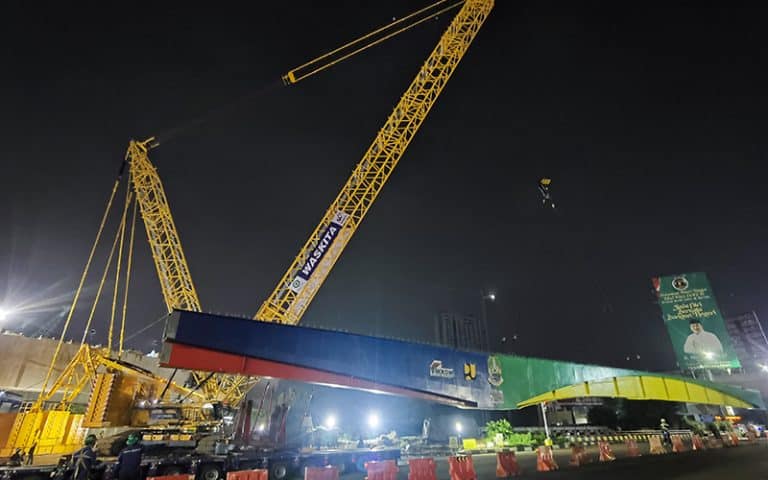 On October 5th, a Sany SCC8000A crawler crane completed the installation for the first piece of girder above the main trunk road of JL. A. Yali in Bekasi, a city 40 kilometres (25 miles) from Indonesia’s capital of Jakarta.

This was a major milestone marking good progress in one of Indonesia’s key national projects, the 20-km Becakayu Toll Road, which will connect the three cities of Bekasi, Cawang, and Kampung Melayu.

The Sany SCC8000A crawler crane, with a 12 m superlift in HJDB working condition, has been undertaking the main hoisting work at the 2A-Ujung section of the Becakayu Toll Road, throughout which it has demonstrated operational smoothness and precision.

Because the operation took place at the main trunk road of the city, temporary traffic controls were imposed, and therefore, strict accuracy and efficiency thresholds were set for the crane due to the tight time schedule.

For emergency response, Sany’s service engineers were on 24-hour standby until the girder was successfully put in place.

In the earlier phases of the project in years past, German hoisting machinery was used to carry out the hoisting operations. But with the solid, time-tested performance of Sany’s equipment surfacing to the forefront, SANY’s equipment received approval to finish the job.

Indonesia’s capital, Jakarta, is one of the most traffic-congested cities in the world and the problem has been ongoing for decades. As one of the solutions to resolve the traffic, the Bekasi-Cawang-Kampung Melayu Toll Road aka Becakayu is a toll road constructed over the Kalimalang River in East Jakarta and Bekasi, in Jakarta, Indonesia to decrease traffic congestion around Kalimalang.

The toll road began construction in 1996 by PT Kresna Kusuma Dyandra Marga (KKDM), founded by Tommy Suharto, but was halted two years later due to the Asian financial crisis.

In June 2017, the company increased its ownership in KKDM by acquiring the remaining shares from other shareholders, resulting in 99,54% ownership, while the remaining 0,46%shares are owned by PT Jasa Marga (Persero) Tbk.”

The toll road was left idling for almost twenty years before a consortium of construction companies took over and restart the project in 2014.

The project faced another setback in 2018 when a section of the elevated toll road section collapsed, resulting in work on a series of other elevated highway projects being halted.

Currently, the project is progressing and we hope that this would solve the long-term traffic congestion problem in Jakarta, Indonesia.