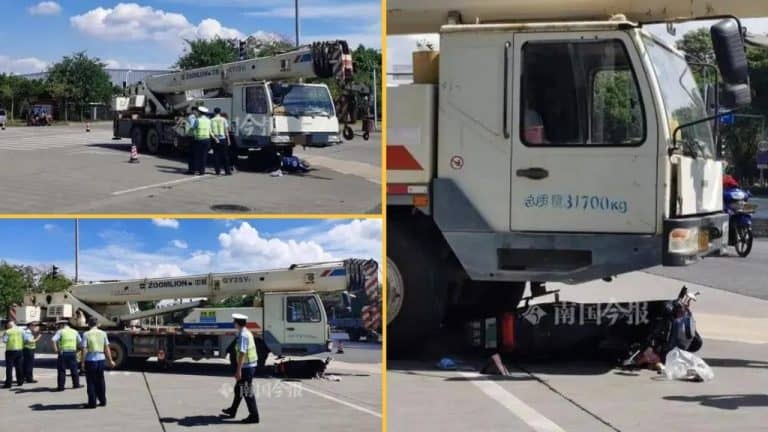 On the morning of 23rd September, a fatal traffic accident occurred at the road intersection in Liuzhou Coty, Guangxi, China.

A truck crane that was turning right hit an electric bike that was waiting at the traffic light, dragging the female motorist and the bike 2-3 metres before the crane stopped.

The accident happened at 8.30 am in the morning, the female motorist was riding an electric bike and waiting at the junction for the traffic light to turn green. She was hit by the crane and fell to the ground.

The crane operator got out from the crane and tried to pull her out, but she was pinned down by the crane’s front right tire. He quickly went back to reverse the crane to pull her out and called the ambulance.

She was sent to the hospital but succumbed to her injuries.

During the investigation with the traffic police, the crane operator mentioned that he did not see the electric bike and was unable to brake immediately after hitting her.

Road safety is the responsibility of all road users, including pedestrians. A wrong move might take the life of someone’s loved one. So we are giving some pointers for everyone’s safety.

When big vehicles, not only cranes, are making turns at road intersections, there are blind spots in which the driver cannot see you. Be sure to keep a safe distance between yourself and the vehicle.

Also, when the heavy vehicle is turning, the rear tires swerve inwards, nearer to the road curb, hence if you are driving a car or motorcycle, do not try to squeeze in between this “death zone”. Definitely not worth the try.

Lastly, when driving on the road, try to keep a safe distance from the heavy vehicle, be it you are in the front or at the back of it. These vehicles are specially designed with rigidity and you will be the one in trouble if you collide with them. Also, try not to overturn in front of them as the heavy vehicle cannot stop in time due to the inertia force.