8 Worse Crane Accidents You Should Know In July/August 2021 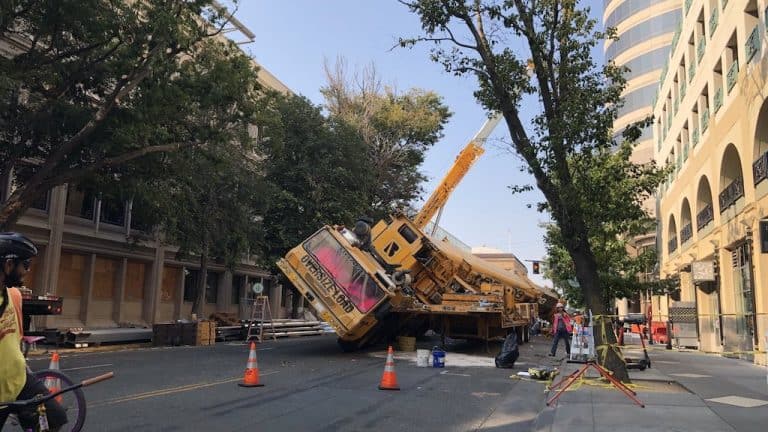 3rd July 2021 – A man has died due to a crane collapsed involving a crane on the site in Barrie, Ontario, Canada.

The man, Corey Philips, 52, was declared dead at the scene. RIP. He was an employee of North Steel and was working under the main contractor Bertram Construction.

5th July 2021 – A rough terrain crane overturned in Yoshinogawa City on a village road and the crane operator was taken to a hospital but was confirmed dead an hour later. It was known that he suffered head injuries.

The tower crane collapsed in downtown Kelowna, British Columbia on 12th July, killing five and injuring others at the job site.

Kelowna is located near Okanagan Lake, about 240 miles west of Vancouver and about 90 miles north of the Canada/U.S. border.

Evacuations were ordered in a 250-foot radius of the crane. As the crane collapsed, the jib and mast sections were strewn over several adjacent buildings, according to the news report. There were about 100 personnel working on the job site when the tower crane collapsed.

4. Chinese Female Crane Operator Falls To Her death in China.

According to her family she stepped back and fell almost 50 metres to her death with the mobile phone she was using to film the update still in her hand.

A cargo ship carrying hoisting equipment heading for Indonesia encountered a typhoon “fireworks” at sea. Strong winds and huge waves caused the hull to be unstable and sway from side to side.

The first incident occurred in Gwalior, south of Agra, in Madhya Pradesh. Three employees of the Gwalior municipal corporation died, and one was seriously injured when the truck-mounted fire rescue platform, which they were using to install a flag on the post office building, suffered a structural failure on one of the outrigger beams.

The second incident occurred on 14th Aug at the US Embassy in Delhi. As reported by the police, part of the building is undergoing construction and the labourers were working inside the US embassy.

A 450-tonne seven-axle Grove GMK 7550 all-terrain crane owned by Bragg has been reported to tip sideways at 12th Street, between K Street and L Street, on the west side of the Hyatt Regency downtown on 14th August 2021.

The mobile crane tilted on one side and luckily was prevented from falling fully on its side due to the counterweight trailer. No one was hurt in the incident and the crane was recovered during the day and driven back to the company’s yard.

A five-axle All Terrain crane caught fire on 12th August morning on the A64 road near Tadcaster, North Yorkshire, UK.

The fire occurred on the eastbound carriageway, but it ended up causing both sides to be closed for a while. The driver managed to exit his cab before the fire really took hold and was uninjured.