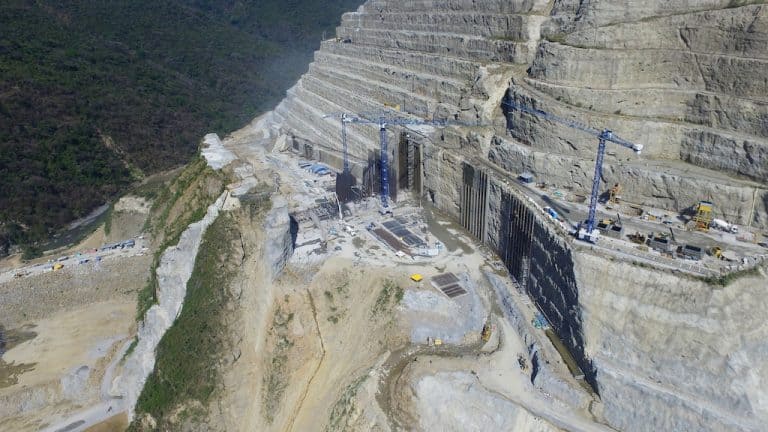 Three Linden Comansa tower cranes are being used to help build the Ituango hydroelectric power plant, set to become Colombia’s biggest power plant and currently the largest infrastructure project underway in the country. Once the plant starts operating at the end of 2018, it will generate up to 2400 megawatts of clean energy, nearly twice that of the San Carlos power plant, currently the country’s largest with a generating capacity of 1240 megawatts.

The CCC Ituango Consortium, made up of the Colombian construction companies Conconcreto and Coninsa Ramón H, as well as the Brazilian construction company Camargo Corrêa, are carrying out the main civil works on this project for EPM (Empresas Públicas de Medellín, Colombia’s main utility company), which will involve a 70 km long reservoir. There are currently three Linden Comansa tower cranes installed on one side of the dam that is being built, which will reach a breathtaking height of 225 metres high.

Two of them, one model Comansa 21LC450 and one Comansa 16LC185, are being used to build a controlled spillway with a design flow of 22,600 m3/second. Both these cranes have been set up to reach a height of 60 metres and have been assembled on a folding cross base with a travelling system so they can be moved on tracks installed on the ground. Therefore, they are able to cover a greater area of the construction site much more quickly than if they had to be dismantled and assembled each time they are moved, thus meaning savings in terms of time and costs. The Comansa 21LC450 has a maximum load capacity of 20 tonnes and a height under hook of 54.6 metres, whilst the Comansa 16LC185 can handle a load of up to 8 tonnes and has a height under hook of 59.5 metres.

The third Linden Comansa crane, a 11LC160, with a maximum load capacity of 8 tonnes, has been in three different locations, always very close to the other two cranes. It was initially installed in an area higher than the spillway in order to be used to help build the tunnel which will provide road access to the spillway. Once this initial work was completed, the crane was moved to a slightly lower area to be used to help build the two intake tunnels, which will take water from the reservoir to the machine room and turbines, which will turn the mechanical energy into electrical energy. At all these locations, the Comansa 11LC160 was set up with a height under hook of 40 metres and, like the other two cranes, on a folding base with a travelling system in order to be able to be moved quickly. This way it can also lift the different loads over a larger area than a stationary crane would be able to, thus making the very best use of resources.

The three cranes were sold to the CCC Ituango Consortium and were initially assembled at the construction site by Gigacon, Linden Comansa’s official distributor in Colombia. The modular structure of the cranes, comprised of parts which are light and easy to handle, thus making them easy to transport and assemble, was fundamental given that the power plant is located in the canyon of the Cauca River, in an area excavated from the mountain, where there is little flat ground, far removed from any towns or cities. Medellín is the closest city, located at around 170 km or 5 hours from the power plant.

Gigacon provides its services throughout Colombia from its offices in Bogotá, Medellín and Cartagena. Its expert team of highly-trained engineers and technical personnel are always on hand to handle its clients’ needs quickly and reliably.

Products In The Article