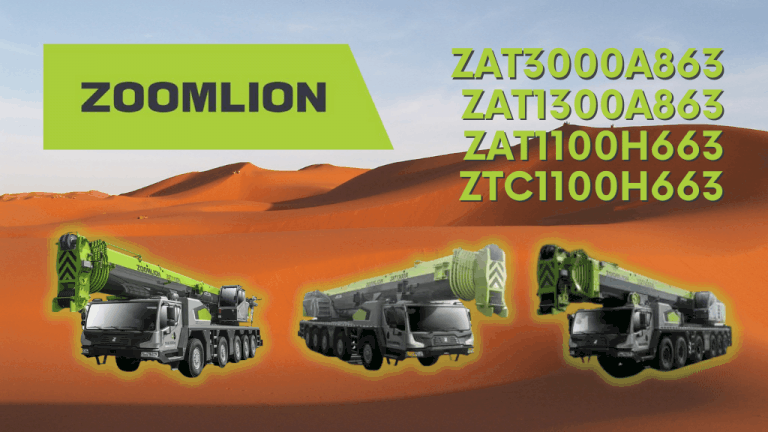 Zoomlion is set to debut four new cranes between 100, 130 and 300 metric ton capacity class. There will be a new all-terrain crane model from each capacity and a 110 tonnes hydraulic truck crane.

Although not much of the information has been released, good to know the general specification of these new cranes.

The new 300-tonne all-terrain crane is a 6-axle and whopping 8-section 90m main boom (which is 10m higher than Grove GMK6300L and Demag AC300/6 !). It has a maximum lifting capacity of 10 tonnes when the main boom is fully extended.

ZAT3000A863 also has a superlift that increase the lifting capacity to 17.5 tonnes. It comes with a 28m fixed jib as standard, with the option to increase to 37.5m. It can be configured with 100 tonnes counterweight.

For this model, the hook blocks, fixed jib and superlift is interchangeable with Zoomlion’s ZAT3000V & ZAT4000V.

The engine is Weichai WP13 and 12-speed automatic transmission. The standard tire size is 445/95R25.

ZAT1300A863 is a 130 metric ton 5-axles all-terrain crane with a revolutionary single-engine concept. The 8-section main boom boasts a total length of 85m, with a maximum lifting capacity of 5.5t.

The ZAT1300A863 is able to carry 22 tonnes of counterweight on board for short distance travelling, working as a taxi crane. It can be equipped with a full counterweight of 60 tonnes.

The engine is Weichai WP12 and 12-speed automatic transmission.

The engine is Weichai WP12 and 12-speed automatic transmission.

So far this is the information that we have gathered. Once there is more news released on these models, we will update again.