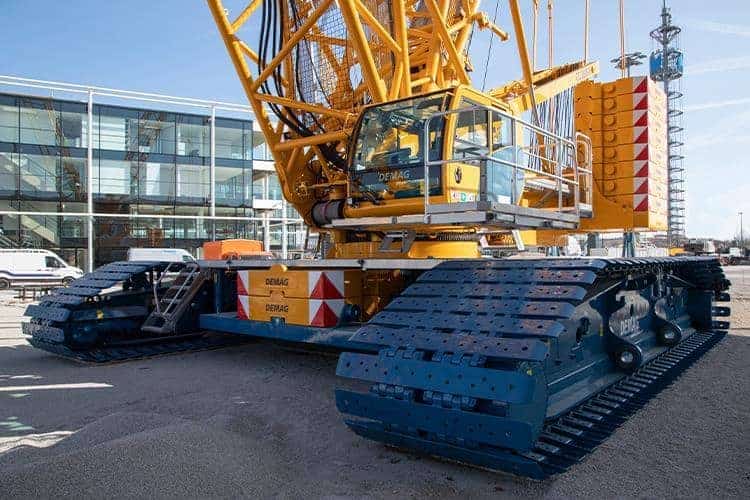 The company’s latest addition to the Demag range was premiered at the Bauma 2019 exhibition in Germany. Terex said the underpinning idea was to further improve the performance of its proven products with technical solutions.

The CC 2800-2 has a  lifting capacity of 600 tonnes and a maximum load moment of 7,700 tonne-metres. With a main boom length of 102 metres, it means that when used in the Superlift LSL configuration, its boom length extends to 138 metres. This can be further increased with a luffing jib and the Superlift SWSL to a system length of 192 metres.

In addition, the main boom combined with the lightweight rigid 12 metre LH and LF extension, allows for a length of 114 metres. The CC 2800-2 model’s basic unit was adapted to that of the CC 3800-1, to include its drivetrain.

Owners of the older CC 2800-1 model will find that several components, such as the luffing jib or the middle main boom inserts, can be used with the successor model as well. These owners would therefore only need to order the new CC 2800-2 with the required components, which would, therefore, reduce the corresponding capital investment.

According to Terex, the CC 2800-2 was designed for simple and efficient transport. Its A-frame and auxiliary hoist can be removed for transport and the SL mast now consists of three (previously four) separate parts. The base crane, with a height of 3.2 metres, weighs 77 tonnes. With the A-frame removed, the weight of the base crane is reduced to 62.5 tonnes.

The two frames used for the counterweight plates, instead of the conventional heavier base plates, also contribute to weight optimisation at 10 tonnes each. With the standard drive and 1.5-metre track shoes, the total transport weight is 37.8 tonnes and, with the Quadro drive, it is 41.5 tonnes.

Equipped with a fall protection system, the crane’s safety features also include wide catwalks and platforms to allow for easy walking access when inspecting and maintaining the crane’s components.

The crane is also equipped with the IC-1 control system with two displays and two additional monitors that provide the operator with a continuous view of the hoists during operation.

Demag offers the CC 2800-2 with technical refinements that include the Vario SL system for continuous, flexible adjustment of the Superlift radius from 11.5 to 15.5 metres and the use of the split tray. The split tray in particular, which allows for rapidly disconnecting counterweight that is no longer required after the erection of the main boom, saves time on the construction site.

The company said the interchangeability of the counterweights among all Demag and Terex lattice boom crawler cranes in the 300-tonne class and above, also reduces costs. The CC 2800-2 accessories range is completed with the Superlift counterweight wagon, which facilitates moving the crane with the complete SL counterweight, as well as the hydraulic telescoping connector for the adjustment of the Superlift radius from 13 to 17 metres. Last but not least, the crane is also prepared for conversion to a narrower chassis with the addition of a Narrow Track Kit.