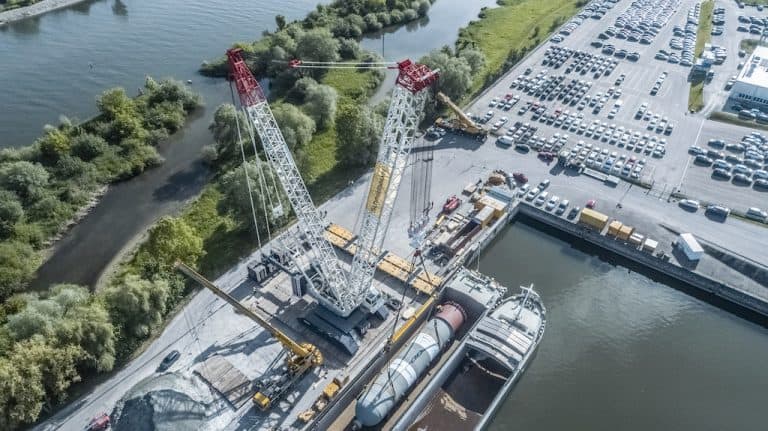 “This kind of project is not something you see every day in Germany,” says Stefan Schmidbauer, the managing director of the crane service provider of the same name. And he is definitely right. Lifts that depend on a 1,600-tonne crane such as the CC 8800-1 are really not a frequent thing – and in this one, a gigantic column had to be lifted and transported from the Port of Kelheim to the Bayernoil location in Neustadt an der Donau.

It was one of the heaviest loads to have ever been transported on roads in Germany.

Before the column arrived with its net weight of 660 tonnes to the Port of Kelheim, it went through a very long journey that took it on a freighter from Italy, through the Mediterranean and the Atlantic, to Rotterdam first.

From there, it was transported on a barge on the Rhine, Main, and the Main–Danube Canal to Kelheim. Once there, the CC 8800-1 was waiting to lift the reactor for the Bayernoil refinery mild hydrocracking unit from the barge and load it onto an SPMT with 44 axles so that the load could be transported to the refinery, about 25 kilometres away.

“For this lift, we configured our CC 8800-1 with a 54-meter boom length and a 50-meter Superlift mast, as well as 320 tonnes of Superlift counterweight and 295 tonnes of central ballast,” reports Schmidbauer crane operator and supervisor Matthias Schneider.

Once prepared this way, the CC 8800-1 was able to take the 33-meter-long column with a gross weight of 715 tonnes, lift it to a height of 10 meters, and position it exactly above the self-propelled modular transporter with a single elegant counterclockwise turn and a radius of 18 meters to then set it down. “It’s always amazing just how smoothly the CC 8800-1 can be controlled despite its sheer size and power.

Whether you’re lifting, turning, or slewing – everything is both perfectly effortless and precise,” crane operator Matthias Schneider says about his CC 8800-1 excitedly. After successfully completing the lift, the crane made the trip to the Bayernoil refinery in Neustadt just like the column in order to finish the job there.

To install the reactor at the Bayernoil facilities, the Demag CC 8800-1 was assisted by a Demag CC 2800-1 during the first part of the lift: The SPMT was first positioned exactly underneath the hooks of both cranes, after which the load was slung and lifted far enough that the self-propelled modular transporter was able to move out from underneath.

After this, the CC 8800-1 lifted the column under the supervision of a signalman until the load was in a vertical position. The CC 8800-1 then held a full load of more than 700 tonnes from its hook at a radius of 26 meters so that the CC 2800-1’s slinging gear could be released. “Needless to say, this was a major effort for our assembly technicians, but not a problem whatsoever for the CC 8800-1 – it’s simply the perfect machine for this type of demanding heavy lift,” Stefan Schmidbauer knows from experience.

When threading the unwieldy columns into place through the building steel structure, the CC 8800-1 was able to once again showcase its precision: “The work really required laser-like precision, but the big CC made it easy as pie. I’d even be able to thread a needle with it,” Matthias Schneider enthusiastically exclaims before adding that he is just as happy with how the project went as his boss is: “It really was a one-of-a-kind job.

Definitely one of the biggest and most challenging we’ve ever tackled. It was time-consuming, it was taxing, and it was nerve-racking, but with the right machine and a great team, we did it all to our customer’s full satisfaction,” Stefan Schmidbauer happily summarizes everything.