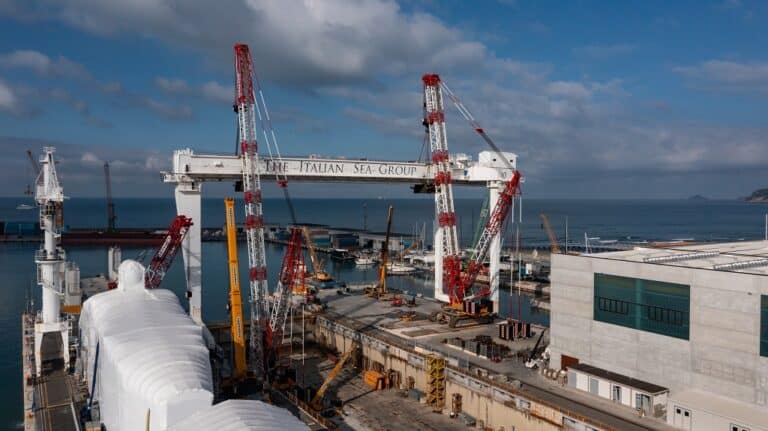 The Apuan coastal skyline in the Italian province of Massa-Carrara has been shaped by a historic gantry crane for decades.

While the crane’s height of 46 meters was a sight to see as it towered over the shipyard facilities of world-famous Italian yacht builder The Italian Sea Group, the landmark’s days were numbered as it stood in the way of plans for the future development of the shipyard site.

Disassembling the old gantry crane would take a formidable tandem lift, which is why crane service provider Vernazza Autogru decided to use its CC 3800-1 and CC 6800 Demag lattice boom crawler cranes, two extraordinarily powerful representatives from their respective capacity classes.

In addition, Vernazza Autogru used two more cranes from the same manufacturer, a TC 2800 and an AC 250-1, in order to take care of secondary lift operations: “We know from experience that Demag and Tadano machines are characterized by high reliability, enormous lifting capacities, and outstanding performance – there’s a reason why our fleet is mostly made up of cranes from this manufacturer,” highlights Vernazza Autogru Technical Director Simone Barattini.

After looking at the various available options, the company’s engineering department determined that there was a whole series of good reasons to use the two lattice boom crawler cranes from Zweibrücken for the main tandem lift: On one hand, they were powerful enough to lift and travel with the load, which weighed over 1000 tonnes and was longer than 105 metres. On the other, they were compact enough to manoeuvre through the work site despite tight space conditions.

But before that could happen, however, the two protagonists of the main lift had to be brought to the work site first: The CC 6800 made the journey from the new Vernazza logistics centre in Vado Ligure, while the CC 3800-1 started its trip in Central Italy, where it had just been working on installing a railroad bridge. It took a total of about two weeks to get the cranes to their destination, with the smaller components being transported on the road and some of the bigger ones by ship.

“This enabled us not only to minimize the time it took to get the cranes to the site but also to adhere to the customer’s timeframe,” job manager Giulio Zunino reports. Once at the shipyard, the CC 3800-1 was set up with an SSL_1 configuration, a 78-meter lattice boom, 50 tonnes of central ballast, 165 tonnes of superstructure counterweight, and 285 tonnes of Superlift counterweight.

Meanwhile, for the CC 6800, the Vernazza team decided on an SSL configuration, a 66-meter lattice boom, 80 tonnes of central ballast, 250 tonnes of superstructure counterweight, and 400 tonnes of Superlift counterweight.

All in all, setting up the cranes took ten days and ten assembly technicians – not a lot when one looks at the challenging conditions under which the cranes were assembled: Both the corresponding logistics operations and access to the worksite were heavily restricted, as the cranes had to be put together in areas where shipyard operations were still ongoing, not to mention that the corresponding work also had to be coordinated with other construction activities intended to renovate the shipyard.

However, this was not the only challenge that the Vernazza team faced at the shipyard: “We first had to level the manoeuvring areas for the two cranes and make sure that they would be able to safely bear the corresponding loads,” Giulio Zunino explains.

“Readying an area this big on which the crane could travel was absolutely necessary, as the 105-meter-long main girder had to be set down on the dry dock for the last bit of disassembly work, so the CC 3800-1 had to be able to travel there with the load on its hook,” Simone Barattini explains. The CC 3800-1 in the dry dock was equipped with a longer main boom than the CC 6800 since its lower working position had to be compensated for.

The slinging gear used for the project was no less complex: “We used two different sets of slinging gear for the tandem lift. Both of them were custom-made for the job and positioned across the underside of the gantry crane’s main girder,” Giulio Zunino reports.

For the CC 3800-1, this meant a single spreader bar that was rigged to the crane with two shackles featuring a load limit of 300 tonnes each and a pair of endless wire rope slings, each with a length of 32 meters and a rated capacity of 218 tonnes, arranged in each shackle.

Meanwhile, for the CC 6800, the assembly consisted of a double spreader bar that was rigged with four shackles featuring a load limit of 300 tonnes each and a total of eight endless wire rope slings with a length of 8 meters and a rated capacity of 262 tonnes each.

The slings were rigged in pairs to shackles with a load limit of 250 tonnes. “This meant that our CC cranes were perfectly prepared to lift the gantry crane, which enabled the technicians to disassemble it piece by piece from the bottom up with the help of demolition-type cutting torches,” Giulio Zunino says while explaining the procedure that was used: “Once a chunk was removed from the gantry crane on both the left and right sides, the two cranes would set the remaining gantry crane down on the ground.”

During the lift, the maximum load handled by the CC 6800 was 730 tonnes at a radius of 16 meters, while the CC 3800-1 handled a maximum of 320 tonnes at a radius of 18 meters. The meticulous planning used by the Vernazza engineering team for the job, coupled with close coordination with the customer’s technicians, made it possible for the project to be completed as planned and scheduled.

“Needless to say, we also have our own highly qualified employees to thank for that, as they completed the lift with impeccable professionalism,” points out Giulio Zunino, clearly proud of his twelve-people team at the site: one crane operator and signal person per the main crane, a job manager, a technical manager, and six operators for the assist cranes.

All in all, their assignment at the shipyard lasted around six weeks – two for setting up the cranes, two for carrying out the work, and another two for tearing down the cranes.

“Everything worked out perfectly”

“We really were able to adhere to what was a very ambitious schedule for a very demanding job, and that’s even despite the challenging conditions at the site. We managed not to disrupt the shipyard’s operations, and we didn’t get in the way of the renovation work either,” Simone Barattini happily summarizes.

Giulio Zunino agrees: “Everything simply worked out perfectly: the planning and coordination with the customer, our team’s professionalism, and, needless to say, the reliability of our CC crawler cranes.”