Japanese manufacturer Kato has exhibited The MR100Lsp-V during 2001 Conet exhibition which was first seen in 2001 July. The 10-ton city crane is equipped with a new fly jib from its original 23.5 metres full power boom. From the operator’s cabin, the two-section 3.3/5.5 metres powered fly jib can be luff hydraulically up to 45 degrees.

It was also mentioned that this is one of the four Kato models that Kobelco has taken legal action against, alleging infringement of its design patents. 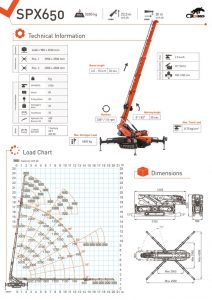