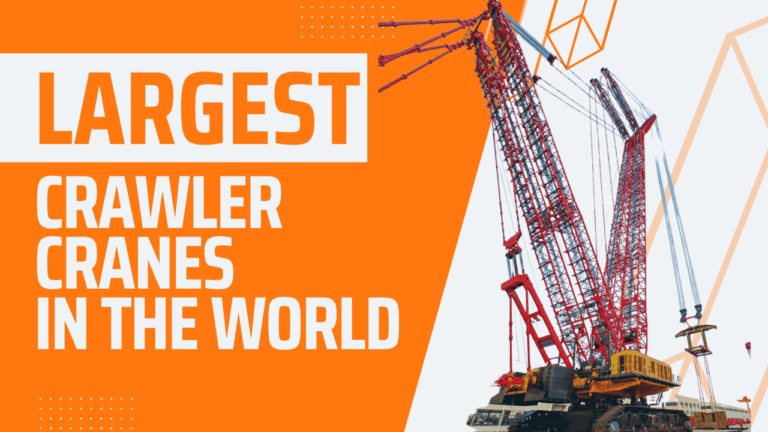 Chinese crane manufacturer claimed to have unveiled the largest crawler crane in the world with its 4,500-tonne SCC45000A in November 2021.

The 4,500-tonne monster has a maximum load moment of 98,000 tonne/metres in its twin-boom configuration.

The crane can also be set up with a single boom with a maximum capacity of 2,000 tonnes. In this configuration, it offers a main boom length of 108.5 metres or 102 metres with an 18.5 fixed jib. A 108.5-metre luffing jib can also be installed on a 96-metre main boom, with a 53-metre derrick boom and suspended counterweight radius of 27.5 to 33.5 metres.

It was a major breakthrough for the Chinese manufacturer after they developed the 4,000 tonnes XGC88000. Jointly developed by Chinese oil company Sinopec, the crane was set to debut in Bauma Shanghai in 2010, but it didn’t happen.

With a whopping 88,000 t/m load moment, it has topped the chart for being the largest crawler crane on land.

Demag CC 8800-1 Twin is an enhanced version of CC 8800-1 which has an additional TWIN kit that makes the crawler crane so powerful. The two boom system freely mounts onto the crawler and boosts a lifting capacity of 3,200 tonnes, twice the amount of his smaller brother CC8800-1.

The first model was introduced in 2007 and sold to Al Jaber Heavy Lift and Transport based in UAE where it worked in the nuclear power industry and oil refineries.

On 18th May 2011, the Sany SCC36000TM rolled off the production line as their largest flagship crawler crane. The crane has a maximum lifting moment of 86,000 tm and the crane will be mainly working on nuclear power projects in China.

The Liebherr LR 13000 was introduced to the market in 2010. It offers a huge lifting capacity of 3,000 tonnes, making it the most conventional crawler crane in the world.

Only a few LR 13000 crawler has been manufactured so far and operated in various regions across the world including the Netherlands, Germany, Mexico and Asia.

The 31000 was by far the largest crawler crane that Manitowoc Cranes has manufactured and the first crane was delivered to South Korea for its first lift for Chunjo Construction Company.

The lattice boom crawler crane features the Variable Position Counterweight (VPC) that minimises the crane’s footprint and ground preparation. As load increases on the hook, the VPC is automatically repositioned to maintain a balanced load moment.

The 2,000-ton ZCC32000W is an all-conditions product with a maximum load moment of 32,000 ton-meters and a maximum boom height reaching 168 meters and has adopted the modular super-wide dual-boom design. It can adapt to a variety of complex hoisting conditions with improved lifting performance of 10-20 per cent compared to products of the same class.

The model can switch between single-engine or double-engine operation per the user’s hoisting needs, selecting either low fuel consumption or strengthened power operation. The system is highly safe and secure and can achieve efficient disassembly and assembly.

Just in March 2021, Zoomlion successfully signed an order with Turkey’s largest crane equipment leasing company to import the ZCC32000W, setting a new record for the largest tonnage crane to be manufactured in China. It marks the entry of super large-tonnage cranes into the international market.

XGC28000 was the highlight for China manufacturer XCMG during 2010 Bauma China exhibition in Shanghai. The crane was rated at 2,000 ton capacity at 14 metre working radius and having a maximum load moment rating of 28,000 ton-metres. The longest boom and jib configuration is 156 metres, which application is for unclear power plant construction, wind farms and chemical industry.

Here comes the younger brother of Demag CC 8800-1 TWIN. It has a maximum load moment of 26,160 tm and a retrofittable Boom Booster that can increase load capacity up to 90% and then dismantle it into several parts for easy transport.

The CC 8800-1 also boasts a hook height of 231m and despite its sheer size, the CC 8800-1 can be easier to handle down to the smallest details in terms of transport, erection and maintenance.

It was in 2008 when Sany agreed with Guangdong Power Engineering Corporation on the co-development of this crane. The R&D started in October 2008 and orders were secured with customers in China at the end of the same year.

It also complies with the certification requirements of CE, North America, Australia, Russia and Taiwan.

This model is said to be designed to be a direct competitor for Demag CC 8800-1.

At the same time, it was the first crane in its country to lift a 6 MW wind turbine.

This is the second crawler that gets into the Top 10 list for Liebherr. The LR 11350 crawler crane sets the standard in the crane over 1000 tonnes. It delivers outstanding load capacity over its entire operating range. This crawler crane is particularly suitable for universal use in offshore handling as it can operate with and without PowerBoom.

With a wide range of boom systems, the LR 11350 can be used flexibly with or without a derrick system. A ballast trailer and suspended ballast are available for the ballasting system. Its range of features is rounded off by high safety standards and great ease of operation.

READ MORE:  Choosing the right crane for your project